The South African Under-18s are the only unbeaten team left in SA Rugby’s U18 International Series after an impressive victory, 49-17 (halftime 29-10), over France on a perfect spring day in Paarl, with the hosts scoring six tries in the process.

In the first game of the day, England broke the SA U18 ‘A’ team’s hearts with a late fightback and a penalty goal after the buzzer to secure the victory that looked unlikely at the break, 36-34.

Although the SA U18s also lost some steam towards the end, they just had too much class for the French, with Sha-Jehaan de Jongh (wing) and Litelihle Bester (outside centre) scoring two tries apiece, while Thurlon Williams landed eight from his nine attempts at goal for a contribution of 19 points.

After the teams traded early penalty goals, the South Africans found their attacking groove and had their opponents under the pump for 10 minutes of superb rugby during which time they scored four tries.

First De Jongh went over after a heel against the head close to the French tryline and some quick thinking by Steven Nel (scrumhalf) before Bester finished an intercept under the sticks. Williams added both conversions to his earlier penalty goal to put the SA U18s in the lead by 17-3, but they were not yet done.

Bruce Sherwood (inside centre) scored next, again from a good move down the left by De Jongh, before Nel got his try in the 21st minute and with Williams adding the conversions, the SA U18s were in firm control at 29-3. 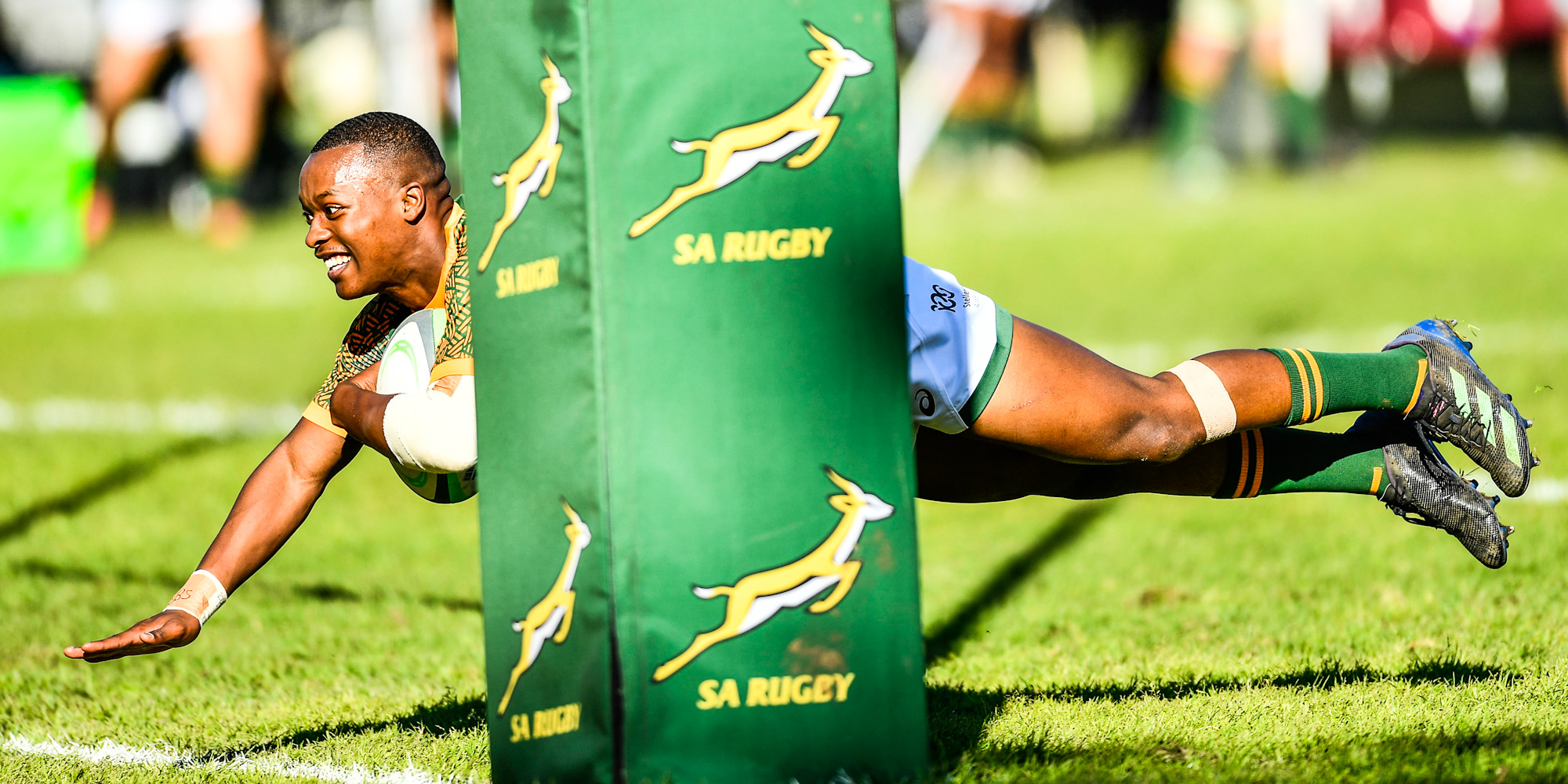 Litelihle Bester goes over for his first try.

The game lost a bit of structure and a few players were injured, but that didn’t stop the visitors from persisting with their attacking intent and they were finally rewarded on the stroke of half-time when No 8 Sialevailea Tolofua went over from a counter-attack, with Kalvin Gourgues (inside centre) adding the extras to make it 29-10 at the break.

Despite losing players to injury, the SA U18 pack grew in stature and turned the screws on their opponents both in the set pieces and at the breakdowns.

Williams added two penalty goals early in the second half before De Jongh and Bester both got their second tries. The left wing scored from another heel against the head at a scrum close to the French line, and the outside centre from a sublime attacking chip kick by Williams, who converted both to put SA in charge at 49-10.

France finally got their second try with just under 15 minutes to go, when Jon Echegaray (left wing) went over after a period of sustained attack.

Soon thereafter the SA U18s were back in their opponents’ half, but they weren’t as dominant as earlier, with a yellow card to replacement hooker Ethan Bester hampering the hosts and ultimately robbing them from another scoring opportunity, but it didn’t detract at all from a very good win.

The South African Under-18 team maintained their status as the only unbeaten team in SA Rugby’s U18 International Series...

France have ended their Under-18 International Series campaign on a winning note with a 20-15 (halftime 12-12) victory o...

SA U18s hope to sign off in style on Saturday...

The South African Under-18 teams are aiming for improved performances when they wrap up the U18 International Series aga...

The South African Under-18s are the only unbeaten team left in SA Rugby’s U18 International Series after an impressive v...

Springbok coach Jacques Nienaber has handed Warrick Gelant a start on the right wing and recalled scrumhalf Faf de Klerk in the only two changes to his starting team for their Castle Lager Rugby Championship tour match against Australia in Adelaide on Saturday.

SA Rugby has issued an urgent warning to rugby supporters to beware of online websites claiming to have Rugby World Cup Sevens tickets for sale.

Springbok Women's Sevens coach Paul Delport included four players with previous Rugby World Cup Sevens experience in his training squad of 13 for the 2022 showpiece, to be played in Cape Town from 9-11 September.

Bulls and WP off to a winning start

The SA Rugby Under-21-Cup kicked off this weekend with defending champions, the Vodacom Bulls U21, getting off to a winning start in Pretoria, while down in Cape Town the DHL Western Province U21s also made a successful start to their campaign.

SA U18s identify areas to work on before second round

The two South African Under-18 teams know which buttons to push as they prepare for the next round of matches in the U18 International Series, which are scheduled to take place in Paarl on Tuesday.

Another midweek game has been added to the Springboks’ itinerary for their November tour with the announcement that the SA Select XV will face Munster in their first of two non-Test matches on their trip to the Northern Hemisphere in an exciting year-end expedition.

Jantjies, Koch ready to make an impact in Adelaide

Elton Jantjies and Vincent Koch are relishing the opportunity to be part of the Springbok "bomb squad" this weekend in their Castle Lager Rugby Championship clash against Australia in Adelaide and said every player knew what his role would be during the match.

Blitzboks have a job to do at the LA Sevens

There are few things as pleasing on the eye as Muller du Plessis in full flight, but for a huge chunk of the 2022 season, that privilege was not one the Blitzboks fans could enjoy.

The Springboks hope to make a special occasion of their first Test against the Wallabies in Adelaide by changing their fortunes Down Under when the teams meet in their Castle Lager Rugby Championship clash at the Adelaide Oval on Saturday.

We run our own race – Soyizwapi

There are permutations galore, but for the Springbok Sevens team the focus in Los Angeles will be simple – they just want to run their own race.

Springbok coach Jacques Nienaber has handed Warrick Gelant a start on the right wing and recalled scrumhalf Faf de Klerk in the only two changes to his starting team for their Castle Lager Rugby Championship tour match against Australia in Adelaide on Saturday.

Another midweek game has been added to the Springboks’ itinerary for their November tour with the announcement that the SA Select XV will face Munster in their first of two non-Test matches on their trip to the Northern Hemisphere in an exciting year-end expedition.