Bosch sparkles in the Diamond City

Curwin Bosch kicked a 81st minute penalty goal to guide the Cell C Sharks to a dramatic 34-33 win over Tafel Lager Griquas in their Vodacom Super Rugby Unlocked match in Kimberley on Friday evening, where the lead changed no less than eight times.

Just one minute earlier, Tafel Lager Griquas flyhalf Tinus de Beer had kicked a clutch penalty goal to put the home side 33-31 ahead at Tafel Lager Park just as his side looked they were on their way to clinching their first win of the competition.

However, unfortunately for the North Cape side, the script was not yet done.

The Durbanites won back the last restart and attacked from way out and when referee Griffin Colby penalised the home side for a ruck infringement, Bosch stepped up to kick the match winning penalty goal.

The previous 78 minutes had delivered a real feast of rugby, with the home side first enjoying a 9-7 lead at the break and then a 13 point lead with 15 minutes to play. If the Cell C Sharks deserved this victory, it would be their refusal to stop chasing the win, and that proved vital in the end.

De Beer, who replaced regular flyhalf and captain George Whitehead less than 24 hours before kick-off after the latter had suffered a broken hand in their final training session, succeeded with his first penalty goal attempt after six minutes to open the scoring.

That lead was value for effort but the visitors grabbed an easy try after 11 minutes when Sanele Nohamba (scrumhalf) scored from an 80 meter counter attack.

With the home side on the attack, Thembelani Bholi (loose forward) turned the ball over and staged a counter-attack and when he was stopped, the scrumhalf found himself in open space and a 30m dash to the line. Bosch easily converted the first of his seven attempts at goal.

De Beer replied with two more penalty goals in the next 10 minutes to regain the lead for his side and at this stage, neither side could really claim momentum on attack and this impacted the flow of the game.

The visitors did however manage some field position and forced an attacking lineout 30 minutes in, but their drive delivered nothing as Tafel Lager Griquas turned the ball over.

The men from Durban were guilty of not assisting their ball carriers and that resulted in seven turn-overs to the home side, two of those right on their own try line.

The team from Kimberley defended stoutly in the opening half and deserved the half-time lead, even if it was for more commitment when on the back foot.

The Durbanites struck first in the second half through a long range penalty goal from Bosch after his forwards forced a scrum penalty 40m out. The successful kick handed the lead to the Cell C Sharks for the second time in the match, which lasted for just five minutes.

The home side managed to keep the ball through a number of phases and with Zak Burger (scrumhalf) dictating the direction of attack, a fine burst by Gideon van der Merwe put Ederies Arendse away in space. The speedster, playing in his 101st match for Tafel Lager Griquas, finished like a true wing. 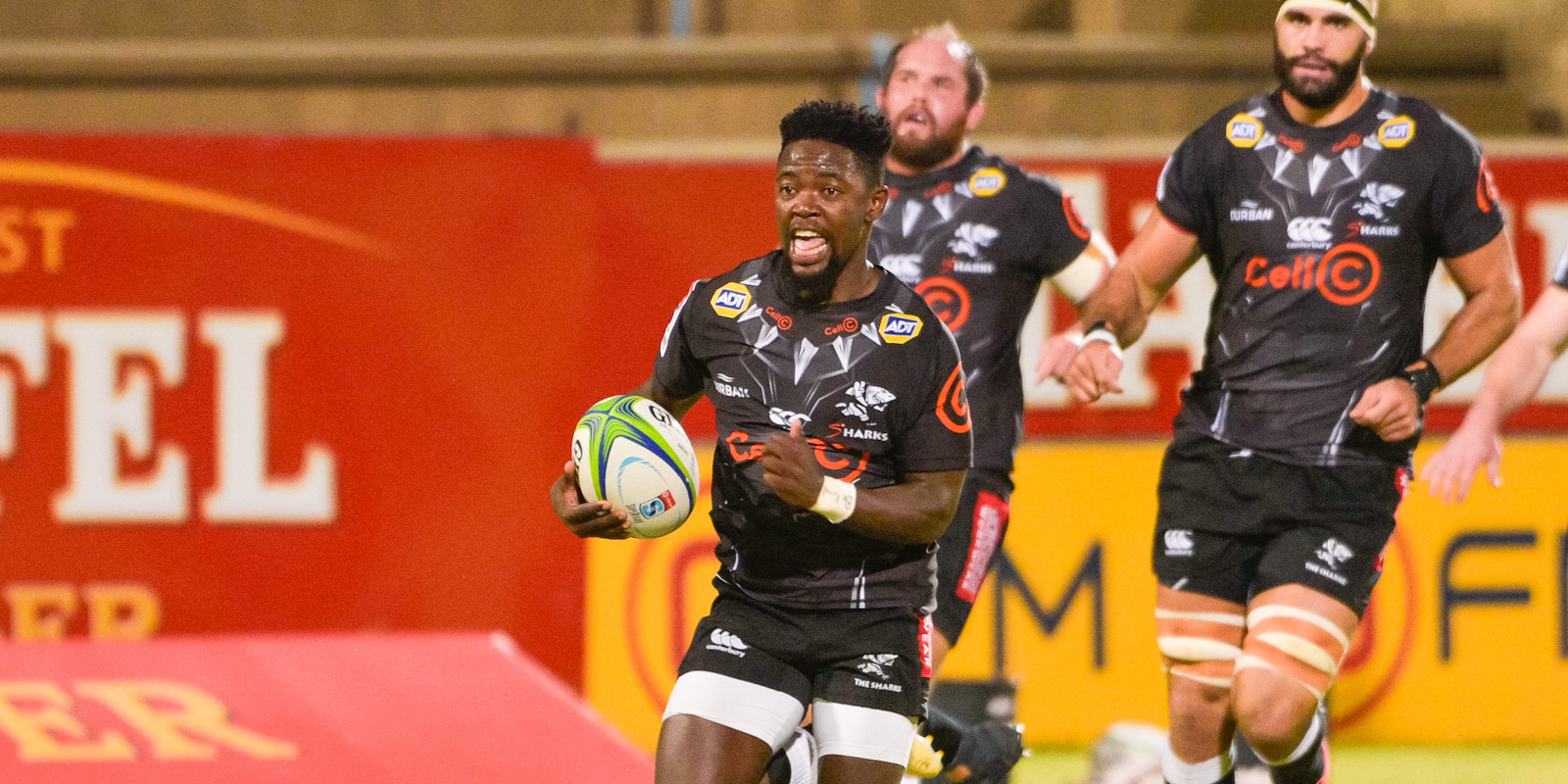 De Beer converted the try to restore the lead after 50 minutes of play (16-9).

A great run by Eduan Keyter added to the score line as the wing brushed off a number of defenders on his way to the try line. The home side scrummed strongly and Burger found Keyter on an acute angle.

Keyter, running hard on the angle, managed to beat two inside defenders to streak away for a 50m try which De Beer converted to stretch the lead to 23-10.

However, the visiting team responded immediately as the home side fluffed the resulting kick-off. They forced a scrum five meters out and from a strong front-foot ball it allowed Manie Libbok to score in the corner.

The replacement-fullback ran a delightful angle and had too much speed for the cover defence. Bosch then duly slotted the conversion from wide out to cut the lead to just six points.

This time it was the Kimberley side who responded immediately when they stole a Sharks lineout and after some superb interplay amongst the loose forwards, Van der Merwe was ready to pounce. De Beer kicked his third conversion to steer his side to a 30-17 lead with 20 minutes left on the clock.

The visitors were far from done though, and they attacked stoutly from the kick-off when Jeremy Ward made a strong burst to the try line. Bosch was again on target to add two points and slash the lead to six points with 15 minutes to go.

That became a one-point lead just one minute later when Dylan Richardson scored. The replacement flanker was given space following a strong run by Phepsi Buthelezi (No 8). This time it was Bosch who kicked the visitors into the lead for the third time in the match.

However, De Beer then stepped up to kick a 45m penalty goal with a minute to go and with clock time already in the red, Bosch stepped up for the final and dramatic act of the match.

With time running out, Vodacom Super Rugby Unlocked victories will be vitally important this weekend as the chasing pack of the DHL Stormers, Cell C Sharks and Toyota Cheetahs aim to reel in the Vodacom Bulls at the top of the standings.

The Famous Grouse, rated as the UK’s top whisky, has joined the roster of official tour sponsors for the British & Irish Lions’ eight-match trip to South Africa next year.

Jeremy Ward will lead the Cell C Sharks when they take on Tafel Lager Griquas in Kimberley on Friday in their penultimate Vodacom Super Rugby Unlocked pool game, hoping to make it three wins in three outings.

Springboks Frans Malherbe and Scarra Ntubeni return to the DHL Stormers' front row for their Vodacom Super Rugby Unlocked encounter with the Toyota Cheetahs at DHL Newlands on Saturday.

Slight tweaks to Toyota Cheetahs side for Cape visit

Springbok Rugby World Cup-winning centre Frans Steyn will have to pass a late fitness test to determine his readiness for Saturday's crunch round six Vodacom Super Rugby Unlocked match against the DHL Stormers in Cape Town.

DHL Stormers stay in the hunt with home win

The DHL Stormers made sure they stay in the hunt for top honours of the Vodacom Super Rugby Unlocked when they outplayed the Toyota Cheetahs 30-13 in a round six clash played at DHL Newlands in Cape Town.

The DHL Stormers and the Cell C Sharks closed the gap on log leaders, the Vodacom Bulls, to just two points with only one round remaining following their Vodacom Super Rugby Unlocked wins over the Toyota Cheetahs and Tafel Lager Griquas this weekend.

The Springbok Women will go high-tech in their training analysis and monitoring after concluding an agreement with advanced wearable technology specialists STATSports.

The first time Eloise Webb joined a rugby training session, she left the field with no intention of returning, but she gave it one more shot and a few years later she is relishing her life as a professional player.

A second tranche of tickets for matches in next year’s Castle Lager Lions Series has become available to South African residents – and they go on general sale on a first-come-first-served basis tomorrow.

With time running out, Vodacom Super Rugby Unlocked victories will be vitally important this weekend as the chasing pack of the DHL Stormers, Cell C Sharks and Toyota Cheetahs aim to reel in the Vodacom Bulls at the top of the standings.

DHL Stormers stay in the hunt with home win

The DHL Stormers made sure they stay in the hunt for top honours of the Vodacom Super Rugby Unlocked when they outplayed the Toyota Cheetahs 30-13 in a round six clash played at DHL Newlands in Cape Town.