As the defending champions and number one ranked team in the world, South Africa are one of five teams in Pool B for the 2023 tournament, along with two more qualifying teams, from the Asia/Pacific qualifier, and Europe.

The Pool Allocation Draw was completed in Paris on Monday, and broadcast live across the world with all teams participating virtually.

The Springboks have never been drawn in a RWC pool with Ireland and will be defending a proud history as they have only lost three pool matches in seven tournaments, against England (2003), Japan (2015) and New Zealand (2019).

The Boks have twice been in the same pool as Scotland, in 1999 and 2015. Since their first RWC participation in 1995, the Springboks have played 43 RWC games, winning 36 and losing seven. That winning tally, including three RWC Final triumphs, give the Springboks an impressive win percentage of 83.72%. 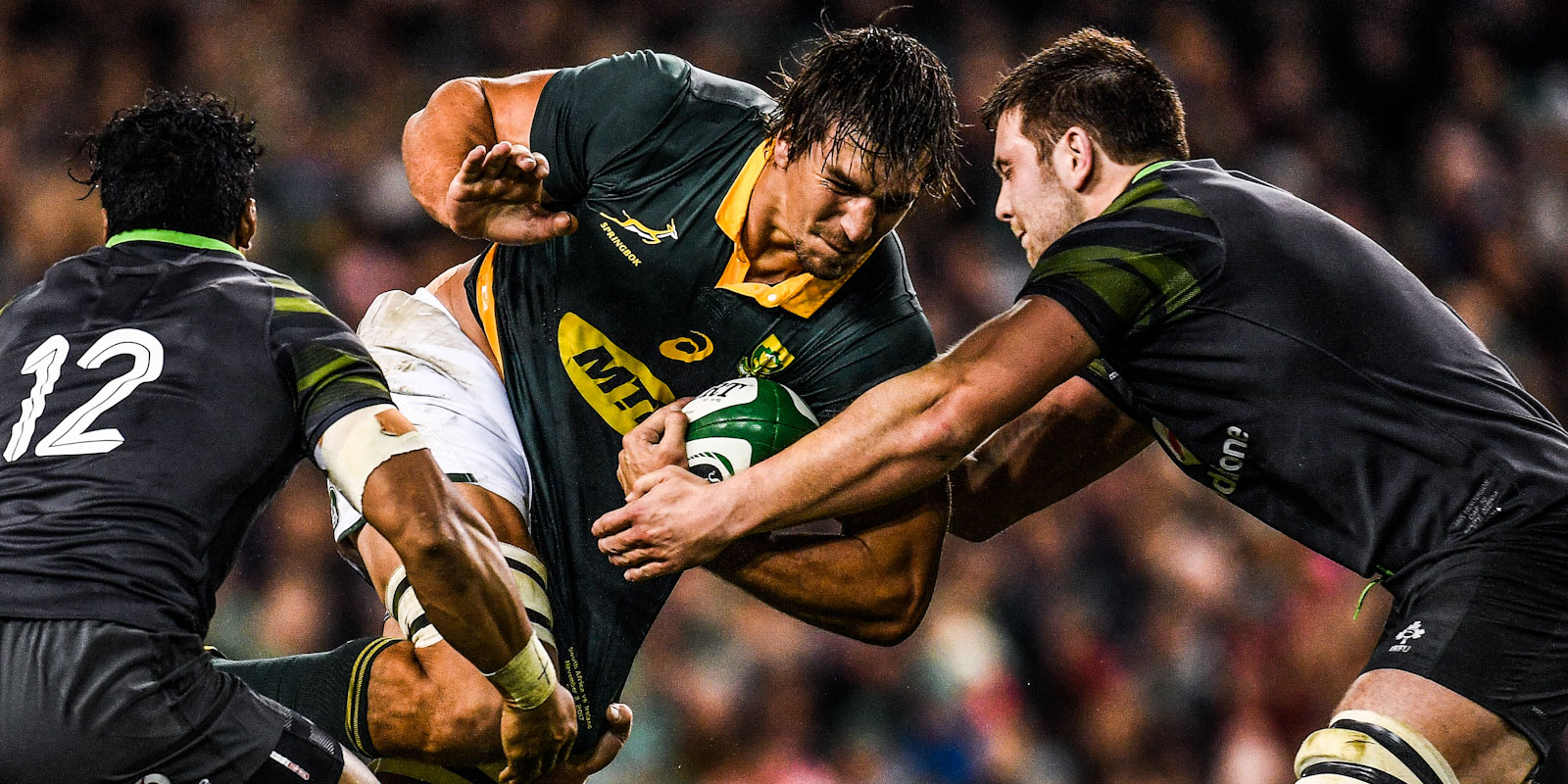 “We are obviously excited about the draw today, and although the Rugby World Cup in France is still almost three years away, it’s good to have an end-goal to work towards,” said Springbok head coach Jacques Nienaber.

“To be in the same pool as Ireland and Scotland will be a massive challenge, but to win the tournament, you have to be able to beat all the teams and we will be properly tested in the pool phases.

“We saw last year the margin for error – even during the pool stages – at any Rugby World Cup is very small.

“Take for instance our situation where we simply had to win every single pool game after our loss to the All Blacks in Japan, to ensure we qualify for the knockout stages.

“If you look at the countries in the top three bands, I would say each one of those teams is capable of beating another on any given day, proven by a team such as Japan, who have made huge strides in recent years.”

Jesse Kriel scores in the Boks' last Test against Scotland, in November 2018

Siya Kolisi took part in the event along with Nienaber, and the Springbok captain said the draw heralds a significant marker for them to aim at.

“It’s exciting, really, to know who your RWC pool opponents will be for the 2023 tournament in France,” said Kolisi.

However, Kolisi said that for the immediate future, the Springboks’ attention will be on another huge and looming challenge.

“For now, we have to turn our attention to the massive challenge the British & Irish Lions will bring next year – there is huge anticipation, both at home and in the UK, for what promises to be another memorable Lions series in South Africa,” added the Springbok captain.

The tournament is scheduled to take place from 8 September to 21 October 2023 across 10 French cities and the full fixtures, with dates, location and times, will be announced early next year.

ASICS unveiled the unique Springbok jersey for next year’s tour to South Africa of the British & Irish Lions on Friday, featuring a vintage colourway and special commemorative 3D logo, among other features.

The desire to ease the pressure closer to the semi-final stages of the Carling Currie Cup will be a big driving force for the teams taking the field in round three of the competition this weekend.

In less than 1000 days – 996 to be exact – the Rugby World Cup 2023 will kick off in France and for the top 12 ranked teams in the world, things got real on Monday when the pool draw took place in Paris, with head coaches and captains joining in virtually from across the globe.

Two-time Rugby World Cup-winner Frans Steyn will start at flyhalf, next to the exciting Ruben de Haas, as Toyota Cheetahs coach Hawies Fourie named a team featuring six changes to the backline for their next Carling Currie Cup clash.

Phakisa Pumas coach Jimmy Stonehouse has tweaked his team with a number of changes for their fourth round Carling Currie Cup match against the Toyota Cheetahs in Nelspruit on Friday night.

Xerox Lions coach Ivan van Rooyen opted for consistency in selection for their round four Carling Currie Cup clash against the Cell C Sharks in Johannesburg on Saturday, naming an unchanged starting team for the spectacle that will play out live on SuperSport.

In less than 1000 days – 996 to be exact – the Rugby World Cup 2023 will kick off in France and for the top 12 ranked teams in the world, things got real on Monday when the pool draw took place in Paris, with head coaches and captains joining in virtually from across the globe.