Four second half tries by the visiting Toyota Cheetahs eased them past the Phakisa Pumas in Nelspruit, with the team from Bloemfontein scoring a well-deserved, but hard-fought 35-31 win at Mbombela Stadium in their fourth round Carling Currie Cup clash on Friday.

The home side had a strong first half and scored two tries to one to lead 12-7 at the break on a wet night in the Lowveld, but four tries, mainly through the forwards, saw the Bloem side home.

Their cause was greatly aided by Frans Steyn's accurate boot, with the experienced flyhalf converting all five tries, while the Phakisa Pumas would lament the 10 points that went missing from Devon Williams' kicking tee.

Both sides scored five tries in the end, with the better accuracy from their goal kicker giving the Toyota Cheetahs the edge on the score board.

The Phakisa Pumas started stronger on home turf, but had not much to show for it early on. Two early lineout drives by the home side did not result in points, while Williams also missed an early shot at goal, giving the Toyota Cheetahs some early respite.

The hosts held most of the early territory and possession, but could not convert that in scoreboard pressure in the opening 10 minutes. That did not deter the Phakisa Pumas from trying to dominate with their forwards though, and from yet another attacking driving maul, Simon Westraadt (hooker) got the reward with the first points of the evening. Williams pulled the conversion, but the 5-0 lead was justice for a strong start.

Willie Engelbrecht scored one of the Phakisa Pumas' tries

The Bloem side also fluffed their lone chance inside the Phakisa Pumas' red zone in the opening 15 minutes when they twice tried to maul from attacking lineouts, but with no positive results. Steyn tried from long range to get his side going, but his penalty effort from 45m out went wide of the uprights.

Neither side could get their attacking game going, with lots of errors in a highly contested breakdown area, where referee Rasta Rashivenge had his hands full with ill-discipline from both side in this phase of play.

From another penalty, the Toyota Cheetahs finally struck gold. Steyn boomed the ball close to the Phakisa Pumas' try-line and although the lineout drive was stopped, a nice delayed pass by Ruben de Haas (scrumhalf) gave William Small-Smith the space to pounce. The winger dotted down in the corner and when Steyn converted, the visitors suddenly held a 7-5 lead after 30 minutes of play.

That lead only lasted a minute though. The home side pummeled the Toyota Cheetahs defence with some strong drives and it was apt that big lock Le Roux Roets was finally driven over for his side's second try. Williams converted to edge his side 12-7 ahead.

The Toyota Cheetahs came desperately close to draw level again, but a handling error spotted by the TMO ruled out the try-scoring effort by Khutha Mchunu (prop) and the home side could jog off the field with a small, but deserved lead.

An early second half try by Daniel Maartens had the Phakisa Pumas in high spirits, with the former Toyota Cheetahs loose forward going over at the back of a strong lineout drive to give his side the perfect start in the second half. 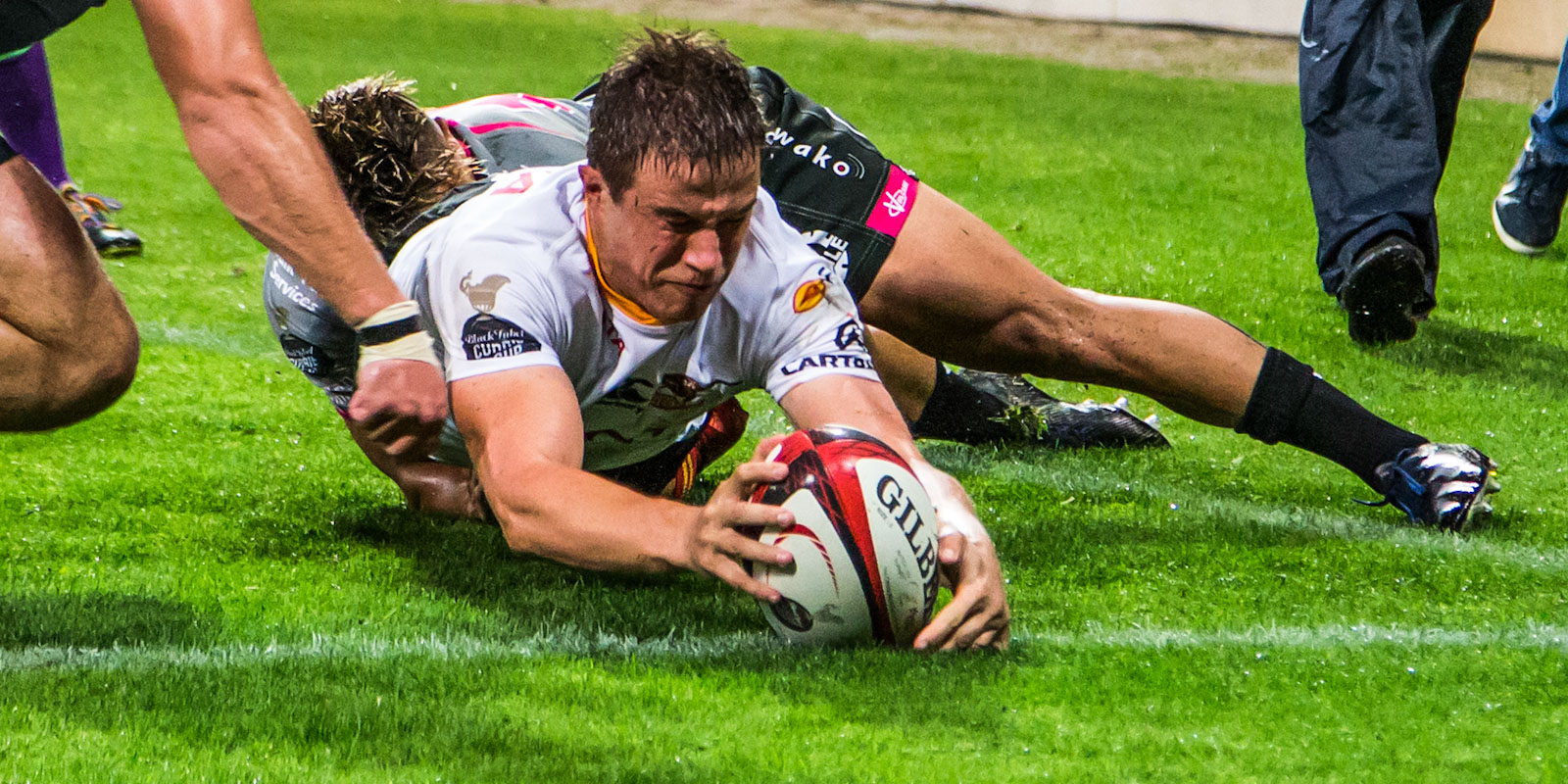 The home side suffered a double blow 50 minutes in. First Roets hobbled off with an ankle injury and soon after, Andisa Ntsila, (flanker) benefitted from a strong Toyota Cheetahs lineout drive. Steyn converted to cut the lead to three points with 30 minutes to play.

Ntsila (with his pack) and Steyn combined 10 minutes later to push the Toyota Cheetahs back into the lead (21-17) for a second time. The visitors drove strongly from a lineout and the Phakisa Pumas could just look at each other as the flanker rose from under a pile of bodies for a third try.

The momentum swung away from the home side even further when their hard-working No 8 Willie Engelbrecht was shown yellow card following a dangerous tackle. The Lowvelders conceded seven consecutive penalties and with Engelbrecht in the bin as well, it was only a matter of time before the visitors would score again.

Replacement hooker Louis van der Westhuizen dotted down following yet another dominant drive and Steyn added to the misery with yet another smooth strike.

Soon after Engelbrecht returned, he scored after a bruising run from close out, breaking a number of tackles to give the home side some hope. Ginter Smuts (replacement scrumhalf) kicked the conversion for a four point game, but it was all over though when Tian Meyer scored a converted try from a strong scrum and a wonderful offload from Aidon Davis released the replacement scrumhalf.

Credit to the Phakisa Pumas though as they fought until the last play, which turned out a try by AJ le Roux (replacement hooker) and a conversion by Smuts to earn the Lowvelders a well-deserved bonus point.

Xerox Lions coach Ivan van Rooyen opted for consistency in selection for their round four Carling Currie Cup clash against the Cell C Sharks in Johannesburg on Saturday, naming an unchanged starting team for the spectacle that will play out live on SuperSport.

The importance of player welfare remains a priority, which is why Springbok Sevens coach Neil Powell has endorsed the decision by World Rugby to move the HSBC World Rugby Sevens Series tournaments in Singapore and Hong Kong next year, despite the fact that it will leave teams short on match time before the Olympic Games in Tokyo in July.

Cell C Sharks coach Sean Everitt has made four changes to the Durbanites’ tight five for their Carling Currie Cup clash with the Xerox Lions in Johannesburg on Saturday evening.

Two-time Rugby World Cup-winner Frans Steyn will start at flyhalf, next to the exciting Ruben de Haas, as Toyota Cheetahs coach Hawies Fourie named a team featuring six changes to the backline for their next Carling Currie Cup clash.

The Xerox Lions jumped two spots into second position on the Carling Currie Cup log with a great victory over the Cell C Sharks, while the Toyota Cheetahs kept alive their semi-final aspirations with a hard-fought fourth round win over the Phakisa Pumas.