The Vodacom Bulls scored 12 tries to one as they comprehensively outplayed Eastern Province by 87-10 in their 2021 Kick-Off Pools match at Loftus Versfeld on Sunday afternoon.

The home side, who held a 38-3 lead at the break, dominated with the visitors from the Eastern Cape falling short in execution and fitness in their first competitive match in over a year.

The first points of the match belonged to the visitors as Inny Radebe (flyhalf) kicked a penalty goal two minutes in to give his team the best start possible.

The Vodacom Bulls responded immediately with a well-taken try from an attacking lineout, which saw Joe van Zyl (hooker) dotting down.

Unfortunately for the EP side, their own lineouts misfired badly, and they lost no less than six in a row on their own throw.

The Vodacom Bulls had no such problems and their captain on the day, Nizaam Carr, was the beneficiary of another strong attacking maul from a lineout. Chris Smith (fylhalf) converted both tries and kicked a penalty goal before a golden 10-minute spell by the home side knocked the stuffing out of the Elephants. 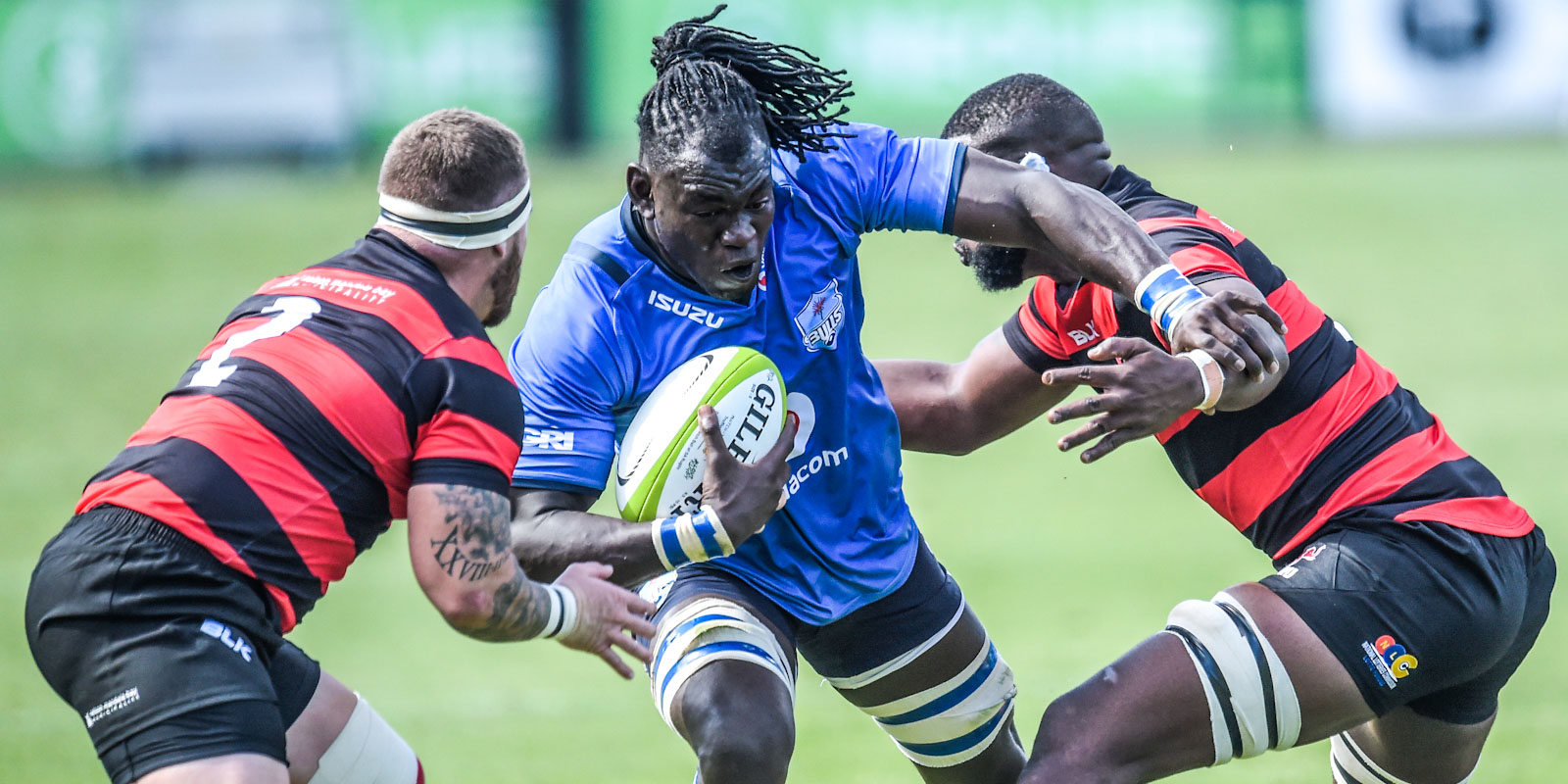 Tim Agaba gets in on the action

The Vodacom Bulls' third try, after 30 minutes, came courtesy of some brilliant attacking rugby with almost half their team handling the ball in a move that saw backs and forwards combine with off-loads, popped-up passes and angled running.

Marco Jansen van Vuren, who started at inside centre, finished the move that broke EP's early resilience, and the home team scored two more tries before halftime to confirm their expected dominance.

First, David Kriel kicked ahead and found the EP cover defence tired and absent, so the fullback could take his time in dotting down, while Carr scored his second after another flowing move from deep within their own half. Smith kicked another conversion for a 35-point lead at the break.

The second half saw a steady flow of tries from the home side. Stravino Jacobs (winger) opened the flood gates five minutes after the break with a solid effort in the corner, having been worked into space by some good inside runners.

He was followed over the tryline by Tim Agaba (flank), who was on hand when Embrose Papier (scrumhalf) took a quick tap penalty near the line.

What followed was some relentless attacking rugby by the best side in the country as Jacobs got his second following a good break by Kriel. The gaps in defence were as big as the gulps of air sucked by the EP side at altitude and this was exploited by the home side who used the width of the field to attack. 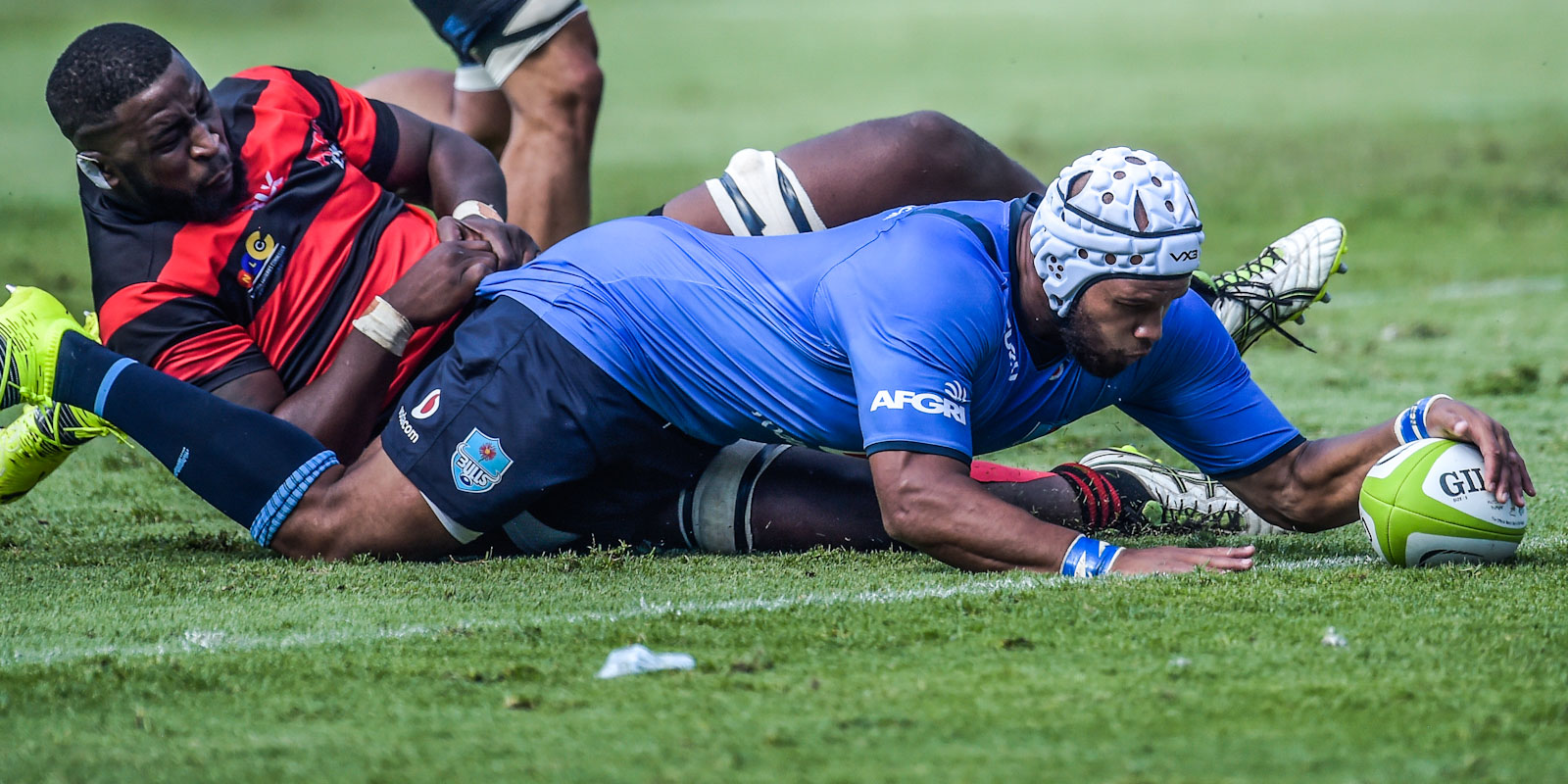 Nizaam Carr goes over for one the Vodacom Bulls' 12 tries

A rash of replacements by the home side resulted in even more fresh legs and once they found each other, the flood gates opened again.

Marnus Potgieter finished off a move started inside their own 22m line and Smith converted his ninth try before being replaced on the hour mark.

Sithembiso Befile scored for the Elephants in a rare spell of sustained attack and keeping possession by the EP side, with the replacement-hooker crashing over from short range.

The respite was short-lived though and when Keagan Johannes pinched the ball from behind the EP scrum, the replacement scrumhalf scored his side's tenth try.

He also scored the 11th of the afternoon after Carr had another inspired burst down the middle of the field, before replacement-flyhalf, Jandre Burger, scored and converted his own try for the final points of the match.

Rosko Specman showed his brilliant attacking instincts with a hattrick of tries as the Toyota Cheetahs defeated the DHL Stormers 34-33 in the Cape side’s first home game at their new Cape Town Stadium home on Saturday afternoon.

Tiaan Swanepoel’s accurate boot secured the Lions a 32-28 victory in their 2021 Kick-Off Pools match against the New Nation Pumas at Emirates Airline Park in Johannesburg on Friday night.

The Vodacom Bulls will take the field sporting a team that is dominated by the next generation of stars when they host Eastern Province in a 2021 Kick-Off Pools match at Loftus Versfeld on Sunday, 28 February.

The sigh of relief this week in the Belfast headquarters of Ulster was audible when it became clear that the Springbok loose forward Marcell Coetzee’s injury was not as bad as expected.

The Springboks will kick off the defence of their 2023 Rugby World Cup crown on Sunday, 10 September 2023 against Scotland in the Stade Vélodrome in Marseille, it was confirmed when World Rugby officially revealed the dates and venues during a live online event in Paris on Friday.

The list of nominations for the SA Rugby Player of the Year Awards for 2020 has a distinct blue tinge to it, with the Vodacom Bulls underlining their dominance of the season with a host of names on the shortlists.

SA Rugby announced on Monday that coaches, parents and players from schools across the country will be invited to a series of webinars as preparations step up a gear for a return to action later in the year.

Ulster have their work cut out in Guinness PRO14

Ulster will have their work cut out when they host Leinster in the plum fixture in the next round of the Guinness PRO14 after missing out on a valuable bonus point for a full house of five log points against Ospreys over the weekend.

World Rugby has made the difficult decision to recommend the postponement of Rugby World Cup 2021, scheduled to be hosted in New Zealand between 18 September to 16 October, until next year. The recommendation will be considered by the Rugby World Cup Board and World Rugby Executive Committee on 8 and 9 March respectively.

World Series to conclude with Cape Town Sevens in December

The HSBC Cape Town Sevens will take on a new mantle after World Rugby announced that the popular event in the Mother City will be the final leg of a revamped and shortened HSBC World Rugby Sevens Series in 2021.

Rosko Specman showed his brilliant attacking instincts with a hattrick of tries as the Toyota Cheetahs defeated the DHL Stormers 34-33 in the Cape side’s first home game at their new Cape Town Stadium home on Saturday afternoon.

The list of nominations for the SA Rugby Player of the Year Awards for 2020 has a distinct blue tinge to it, with the Vodacom Bulls underlining their dominance of the season with a host of names on the shortlists.