Tafel Lager Griquas’ forwards were in a ruthless mood as they spearheaded a 43-0 victory over Eastern Province in their 2021 Kick-Off Pools match in light rain at the Nelson Mandela Bay Stadium in Gqeberha on Wednesday evening.

In fact, if it wasn’t for some unnecessary mistakes by the visitors, their victory would have been much bigger, with the Elephants paying dearly for some ill-discipline which kept them on the back foot and stuck in their own half.

Tafel Lager Griquas dominated most of the match mainly through their pack – especially at scrum, lineout and maul time – but the Elephants deserve credit for never giving up and defending quite well.

This good defence by the home team, coupled with a little bit of inaccuracy from the men from the Northern Cape, meant the halftime score was only 17-0 to the visitors.

Tafel Lager Griquas set six mauls close to the EP try-line in the first half, but were only rewarded from three of them – the first one ended in a penalty try, after which Gideon van der Merwe (flanker) scored two unconverted tries from the back of their lineout drives. 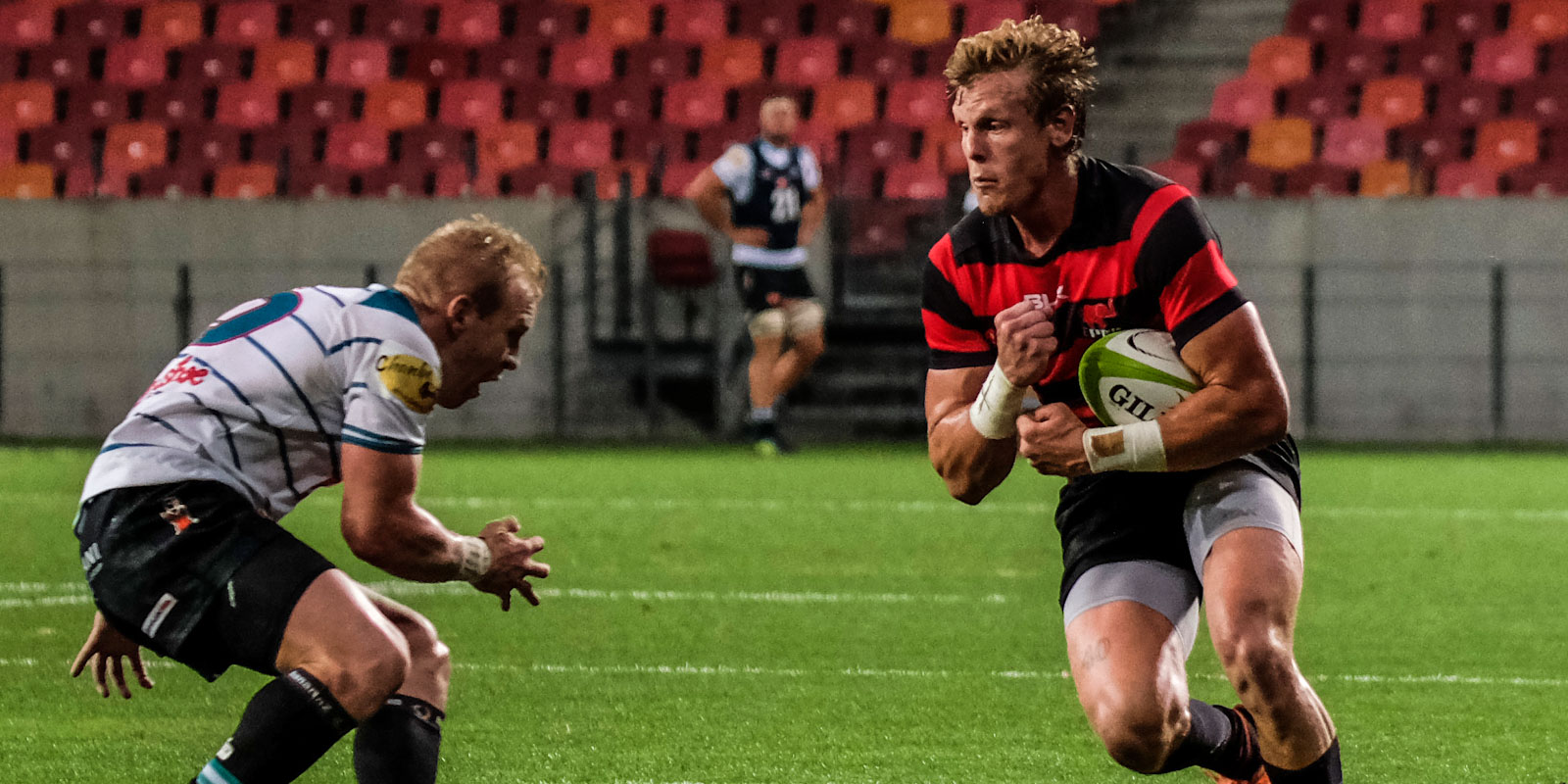 Christopher Hollis never gave up for the home team.

The other opportunities were undone by mistakes by Tafel Lager Griquas, who controlled the breakdowns, territory and possession, and it was clear they knew where to attack the home team.

Although EP tackled well, they were under constant pressure, with Tafel Lager Griquas’ loose forwards – Van der Merwe, Stefan Willemse and Carl Els – especially ruthless on defence and on the ground.

The visitors added two more maul-tries in the third quarter – both scored by HJ Luus (replacement hooker) – to underline their dominance in the game, before things opened up with the Elephants losing Riaan Arends (right wing) to a red card for foul play.

James Verity-Amm (replacement fullback) finally broke the EP defence for the first try scored by a back on the night, and with Ashlon Davids (replacement scrumhalf) slotting his second conversion, the visitors’ lead stretched to 36-0 with 10 minutes to go.

After fluffing a few more opportunities, a third try by Luus – from yet another lineout drive – sealed the deal for Tafel Lager Griquas as they recorded their first victory of 2021 after failing to get any wins in the 2020 season.

Courtney Winnaar will lead Eastern Province for a second time in a week when they host Tafel Lager Griquas in their 2021 Kick-off Pools match at Nelson Mandela Bay Stadium on Wednesday in one of a few similarities to the side that played at the same venue six days ago.

Good news as Springbok Women power ahead in Stellenbosch

World Rugby’s announcement on Tuesday of a global women’s season was met with great excitement by the Springbok Women at their base in Stellenbosch, where the training squad were increased to 40 players as their preparations moved up a gear.

Tafel Lager Griquas made seven changes to their starting team to face Eastern Province in their 2021 Kick-off Pools match at the Nelson Mandela Bay stadium on Wednesday, where they will be hoping to secure their first win.

Edinburgh registered a dramatic 15-14 away win against Connacht in the Guinness PRO14 this past weekend to strengthen their chances of playing in next year’s Champions Cup.

Former Springbok loose forward Jacques Potgieter has been named at No 8 for the Toyota Cheetahs’ next game in the 2021 Kick-Off Pools, on Friday against the New Nation Pumas in Nelspruit.

Springbok prop Trevor Nyakane and a host of experienced seniors will return to the Vodacom Bulls’ starting line-up for their 2021 Kick-off Pools clash against the DHL Stormers at Loftus Versfeld on Friday.

Am back in charge for Cell C Sharks’ Jozi trip

The Cell C Sharks have made six changes to their backline - which sees the welcome return of Springbok midfielder and regular captain Lukhanyo Am - and a few changes up front for their 2021 Kick-off Pools match against the Lions in Johannesburg on Saturday.

Springbok flyhalf Elton Jantjies will lead an experienced Lions team when they host the Cell C Sharks in their second home game in the 2021 Kick-off Pools series in Johannesburg on Saturday.

Courtney Winnaar will lead Eastern Province for a second time in a week when they host Tafel Lager Griquas in their 2021 Kick-off Pools match at Nelson Mandela Bay Stadium on Wednesday in one of a few similarities to the side that played at the same venue six days ago.