Tafel Lager Griquas and the New Nation Pumas finished their 2021 Kick-Off Pools campaign on a dramatic note on Saturday as the Kimberley side registered a nail-biting 23-22 win at home.

New Nation Pumas flyhalf Eddie Fouche had a last-minute penalty attempt to win the match, but it drifted to the right, leaving his side desperately short of a remarkable comeback.

This, however, handed Scott Mathie a much-needed win at home for the very first time.

Tafel Lager Griquas held a 11-0 lead at the break, but a strong second half by the Lowvelders - thanks to two tries and a penalty try - allowed them overtake the hosts on the scoreboard after 50 minutes, and they held onto the lead until the final two minutes of the match.

Six penalty goals by Tafel Lager Griquas flyhalf Tinus de Beer - three of which were kicked in the last quarter of the match – however, proved decisive in the end.

The opening exchanges showed very little difference in the approach from both teams, who were not scared to use their backlines from first phase possession, but with both defences

tight most of the attacking endeavours did not have the desired result - mainly due to ill-discipline at the breakdowns.

Playing with the wind at their backs, the home side enjoyed most of the territorial advantage early on and they soon crashed over from an attacking line-out drive, but the ball-carrier was held out.

The Pumas, with impressive tighthead prop Marne Coetzee showing his worth in his 50th outing for the Lowvelders, had the better of the scrum exchanges and that allowed them to relieve some of the early pressure.

Unfortunately for the New Nation Pumas, their discipline was poor, which handed the momentum back to Tafel Lager Griquas time and again.

The first points of the match were compliments of a penalty goal by De Beer in the 27th minute.

The Pumas lost prop Morgan Naude to a leg injury after 30 minutes of play, but more misery was to follow as Etienne Taljaard (wing) failed to gather an up-and-under, and in a flash Daniel Kasende (wing) pounced on the error to score the first try of the match to take an 8-0 lead.

New Nation Pumas flanker Willie Engelbrecht was shown a yellow card for repeated infringements in the process, and when they pulled down another maul, De Beer slotted his second penalty goal to lead 11-0 at the break.

Tafel Lager Griquas were also dealt a blow just before the break as Adre Smith (lock) was yellow carded for foul language, which saw them being reduced to 14 men. 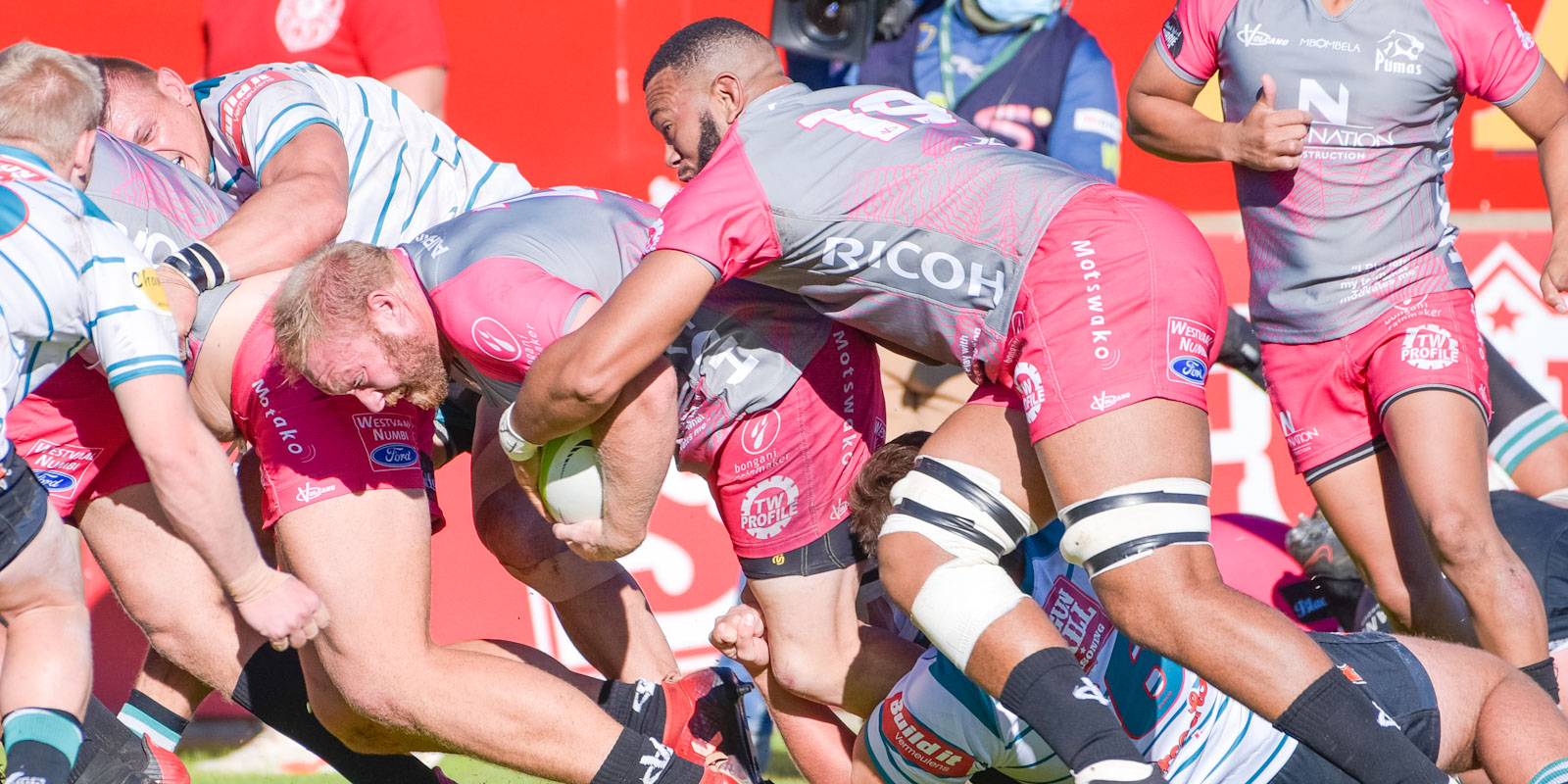 Simon Westraadt on his way to the tryline.

The visitors bounced back after the restart, as Brandon Valentine (replacement lock) had a strong run down the middle before the ball was recycled and Taljaard ran onto a deft grubber by Eddie Fouche, who finished neatly in the corner to score their first points.

New Nation Pumas hooker Simon Westraadt had no problem dotting down following another strong lineout maul and Fouche converted to push them into the lead – with the side scoring 12 points with Smith off the field.

With momentum favouring the Lowvelders, the hosts found themselves losing composure and structure, and the visitors were rewarded with a penalty try in the 55th minute after yet another maul was collapsed, and Sibablo Qoma (replacement loose forward) received a yellow card.

De Beer tried hard to sway things for his team with two long-range penalty goal attempts. The first one held up in the strong wind, but the second sliced through the uprights, cutting the visitors’ lead to five points, and simultaneously boosting his team’s momentum.

A third long-range effort by De Beer made it a two-point game with 18 minutes to play.

Fouche kicked a penalty goal to extend their lead back to five again, but with the home side slowly getting back some parity, this was short-lived as De Beer kicked back-to-back penalty goals to take his tally for the match to six, handing his team a one-point lead in the process.

Fouche had one more go on the final buzzer, but the flyhalf shanked the kick to the right, much to the delight of the home side.

Can Munster upset the odds in the PRO14 final?

Munster go into Saturday’s Guinness PRO14 final against Leinster knowing full-well that they are the underdogs, but the desire for success, and the opportunity to give South African-born stalwart CJ Stander the perfect farewell will be the driving force behind their final hopes.

The New Nation Pumas have announced a match squad for their final 2021 Kick-Off Pools clash against Tafel Lager Griquas in Kimberley on Saturday afternoon, although it is expected that Jimmy Stonehouse will not make big changes to last week’s starting team which defeated the Toyota Cheetahs in Nelspruit.

DHL Stormers mix it up for Lions encounter

There are a number of changes to the DHL Stormers team for their final 2021 Kick-Off Pools game against the Lions at Cape Town Stadium on Saturday.

The Vodacom Bulls, Emirates Lions, Cell C Sharks and DHL Stormers’ first foray into Europe has been confirmed with the news that the PRO14 Rainbow Cup will kick-off on the weekend of 24 April, with fixtures for the first three rounds now established.

Eastern Province had no answer for the Toyota Cheetahs’ ball-in-hand approach as the Free Staters finished the 2021 Kick-Off Pools with a commanding 71-12 victory in Bloemfontein on Sunday afternoon.

The Guinness PRO14 final sent a strong message to South Africa’s PRO14 Rainbow Cup teams that Leinster will be the team to beat after the Irish outfit successfully defended their title over the weekend.

World Rugby committed to fostering a safer game for all

The World Rugby Player Welfare and Laws Symposium 2021 has kicked off with CEO Alan Gilpin reaffirming the international federation’s commitment to foster a safer and more accessible game for future generations.

Rassie Erasmus, Director of Rugby, praised the eight local provincial teams, SA Rugby’s referees and SuperSport for their contribution to an attractive brand of rugby displayed during the 2021 Kick-Off Pools, which concluded on Sunday after 16 action-packed matches.

When the Webb Ellis Cup went to Middelburg

The Webb Ellis Cup was on the road on Wednesday, making its way to Middelburg in Mpumalanga – escorted by SA Rugby and World Rugby’s Player of the Year for 2019, Pieter-Steph du Toit – where an ardent Springbok fan was treated to a once-in-a-lifetime experience.

Can Munster upset the odds in the PRO14 final?

Munster go into Saturday’s Guinness PRO14 final against Leinster knowing full-well that they are the underdogs, but the desire for success, and the opportunity to give South African-born stalwart CJ Stander the perfect farewell will be the driving force behind their final hopes.

Eastern Province had no answer for the Toyota Cheetahs’ ball-in-hand approach as the Free Staters finished the 2021 Kick-Off Pools with a commanding 71-12 victory in Bloemfontein on Sunday afternoon.