George Cronje, a former SA Schools star No 8, is enjoying every minute of his time at the SA Rugby Academy and says the experience has fuelled his motivation to dream big and become the best player he can be.

The tough-as-nails looseforward, who made his Carling Currie Cup debut last season for the Toyota Cheetahs at only 19 years old, is making the most of the opportunity to learn as much as possible from Junior Springbok coach Bafana Nhleko and his predecessor Chean Roux as he looks to grow as a player at this crucial stage of his career.

“It is fantastic to be here, and a big privilege. It is every Under-20 player’s dream to be here,” said the first year BA Agriculture student.

Cronje’s potential was revealed at a young age having been part of SA Rugby’s Elite Player Development (EPD) programme before participating in the SA Rugby U18 Academy Week and Craven Week competitions.

He then starred for the SA Schools team in the Under-18 International Series in 2019 where he served as the team’s vice-captain. Cronje also spent some time at French club Clermont Auvergne before returning to South Africa where he joined the Free Staters in July last year.

This move paid off soon after as he made his senior debut in the Carling Currie Cup against the Vodacom Bulls at Loftus Versfeld, which was followed up by clashes against the Cell C Sharks, DHL Western Province and Tafel Lager Griquas.

“Playing in the Currie Cup was a dream come true,” said Cronje. 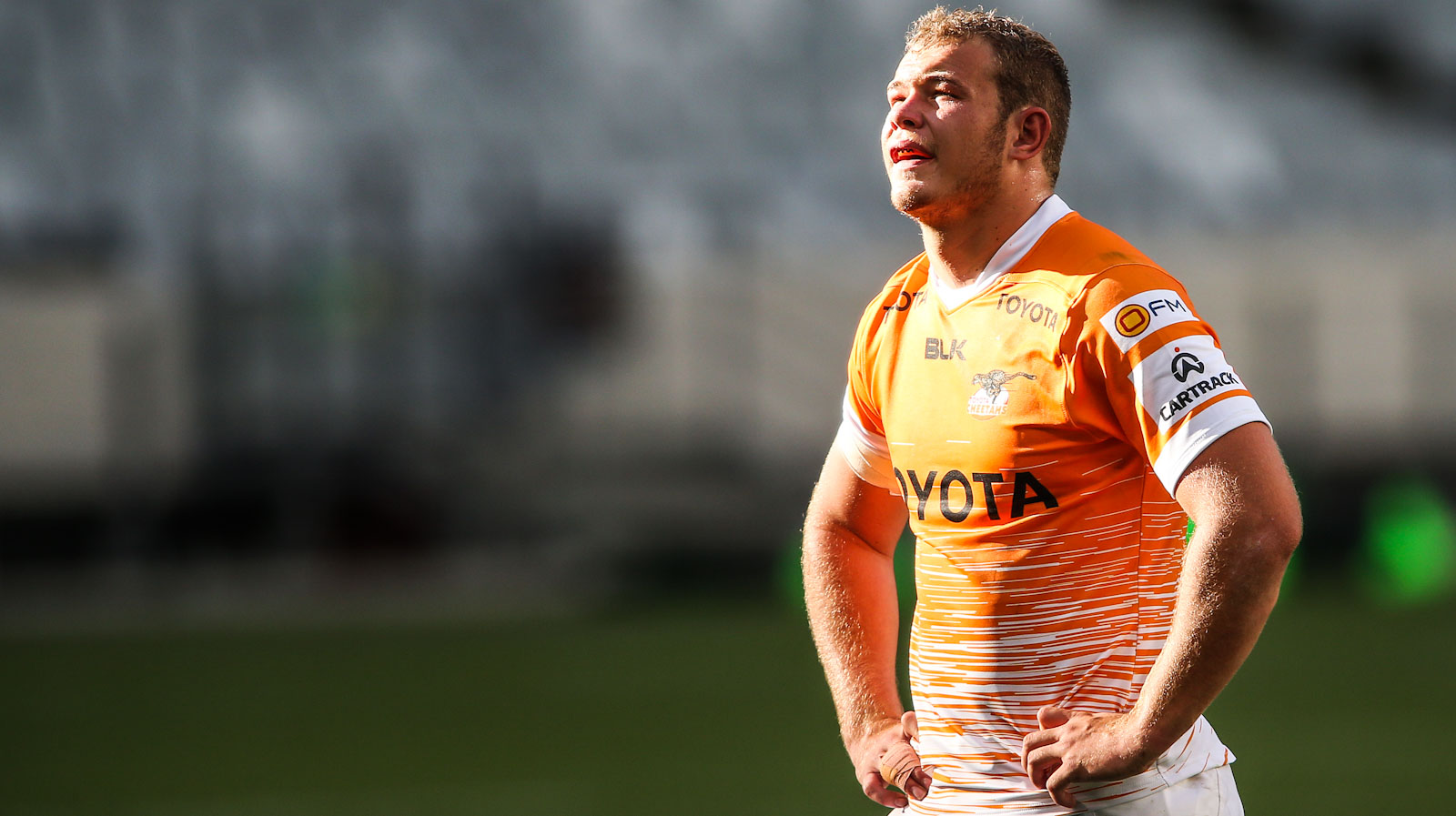 Dreaming big - George Cronje made his Carling Currie Cup debut at only 19 years of age.

“It has always been a dream to represent Free State in the competition, although I didn’t think it would happen at this age. So when the opportunity presented itself, it was very pleasing, and it inspired me to continue to strive for more.”

With the SA Rugby Academy in full swing and Nhleko hopeful about possible SA U20 international matches later in the season, Cronje was encouraged about the prospect of wearing the green and jersey once again.

“I had the privilege of representing the SA Schools team in 2019, and I will never forget the feeling of pulling that jersey over my head,” said the former Grey College pupil.

“It was a similar feeling to playing my first Carling Currie Cup match. The possibility of being able to wear the Junior Springbok jersey is also something I would like to achieve.”

Off the field one of Cronje’s biggest passions is farming, and he admits it is a career he would like to pursue later in his life.

Commenting on how he strikes a balance between rugby and studying the talented No 8 said: “It is challenging to balance rugby and my studies, but it has its positives such as helping to take my mind off rugby sometimes.

“Farming is in blood. I love being on the farm and getting my hands dirty. It also runs in my family because my father and uncle farm in Theunissen.”

Looking forward Cronje planned to take his rugby career in his stride rather than setting specific long-term goals and said: “I’d like to continue developing as a player and to become the best that I can be. It is also very important for me to enjoy my rugby as much as possible.

“In the long term, I’d like to play at the highest level, but for now my focus is on growing as a player and giving my best in every match I play.”

Rainbow Cup SA: Sharks and Bulls on top in Round 1

The PRO14 Rainbow Cup SA got off to a flying start on Saturday afternoon with a drama-filled match in Cape Town when the Cell C Sharks edged the DHL Stormers 33-30, while the Vodacom Bulls defeated neighbours Emirates Lions 24-9 thanks to late surge in their evening encounter at Loftus Versfeld in Pretoria.

All the action from the Rainbow Cup SA openers

Missed any of the action from Saturday's opening round of the PRO14 Rainbow Cup SA? Here are all the highlights from Cape Town and Pretoria.

Three of the four matches in round six of the FNB Varsity Cup played in Pretoria on Friday resulted in dramatic finishes, with the result only confirmed in the last play of each match.

A quick-fire second-half hat-trick by Cell C Sharks lock Reniel Hugo saw the Durbanites get their PRO14 Rainbow Cup SA campaign off to a winning start by beating the DHL Stormers by 33-30 in an eight-try thriller on a glorious sunny autumn day at Cape Town Stadium.

Two tries in the closing 14 minutes steered the Vodacom Bulls to an encouraging 24-9 victory against the Emirates Lions in their PRO14 Rainbow Cup SA opener at Loftus Versfeld on Saturday evening.

The winner of the 2021 Castle Lager Lions Series in South Africa will be the recipients of the first perpetual trophy in the history of the British & Irish Lions.

Junior Springbok coach Bafana Nhleko and Springbok prop Frans Malherbe left the field encouraged after a contact training session between the SA Rugby Academy and the DHL Stormers in a sunny Stellenbosch on Tuesday.

The Walter Sisulu University's All Blacks outplayed the Cape Peninsula University of Technology in Pretoria on Tuesday to remain the only unbeaten side in the 2021 FNB Varsity Shield.

The experienced Alun Wyn Jones will lead the British & Irish Lions on their forthcoming trip to South Africa, his fourth tour in the famous red jersey to the same country where he made his debut back in 2009.

Cell C Sharks head coach Sean Everitt has opted for continuity by naming an unchanged starting XV for their second-round PRO14 Rainbow Cup SA fixture against the Emirates Lions in Durban on Saturday.

Rainbow Cup SA: Sharks and Bulls on top in Round 1

The PRO14 Rainbow Cup SA got off to a flying start on Saturday afternoon with a drama-filled match in Cape Town when the Cell C Sharks edged the DHL Stormers 33-30, while the Vodacom Bulls defeated neighbours Emirates Lions 24-9 thanks to late surge in their evening encounter at Loftus Versfeld in Pretoria.

The winner of the 2021 Castle Lager Lions Series in South Africa will be the recipients of the first perpetual trophy in the history of the British & Irish Lions.