The Springbok Sevens squad failed to progress to the Cup quarter-finals of the HSBC France Sevens tournament in Toulouse when they were beaten 19-7 by Samoa in their final Pool D clash on Saturday.

This, together with defeat to Ireland on Friday, meant that the South Africans only finished third in their pool and lost the opportunity to extend their lead on the overall HSBC World Rugby Sevens Series log.

They did recover to beat Japan 40-0 in the ninth-place quarter-finals and will face Scotland in the semi-finals on Sunday. The match will be broadcast on SuperSport at 12h12.

Luckily for the Blitzboks, their nearest contender on the log, Argentina, also suffered a defeat at the hands of Ireland in the Cup quarter-finals, so the South Americans are unlikely to overhaul South Africa’s lead at the top of the standings.

The tournament concludes on Sunday and both Argentina and Australia would have gained ground on the Blitzboks.

Springbok Sevens captain, Siviwe Soyizwapi, lamented their performance against Samoa and said the team only had themselves to blame.

“It is disappointing that we could not make the quarter-finals, but we just made too many errors against Samoa to put ourselves in a position to win,” he said.

“At least we bounced back well against Japan and will use that momentum for our match against Scotland.”

Soyizwapi pointed to the fact that they are still very much in contention to win the overall series: “This is a tough sport and if you make one mistake, you pay the price. “We – and other big-name teams like New Zealand – found that out today. 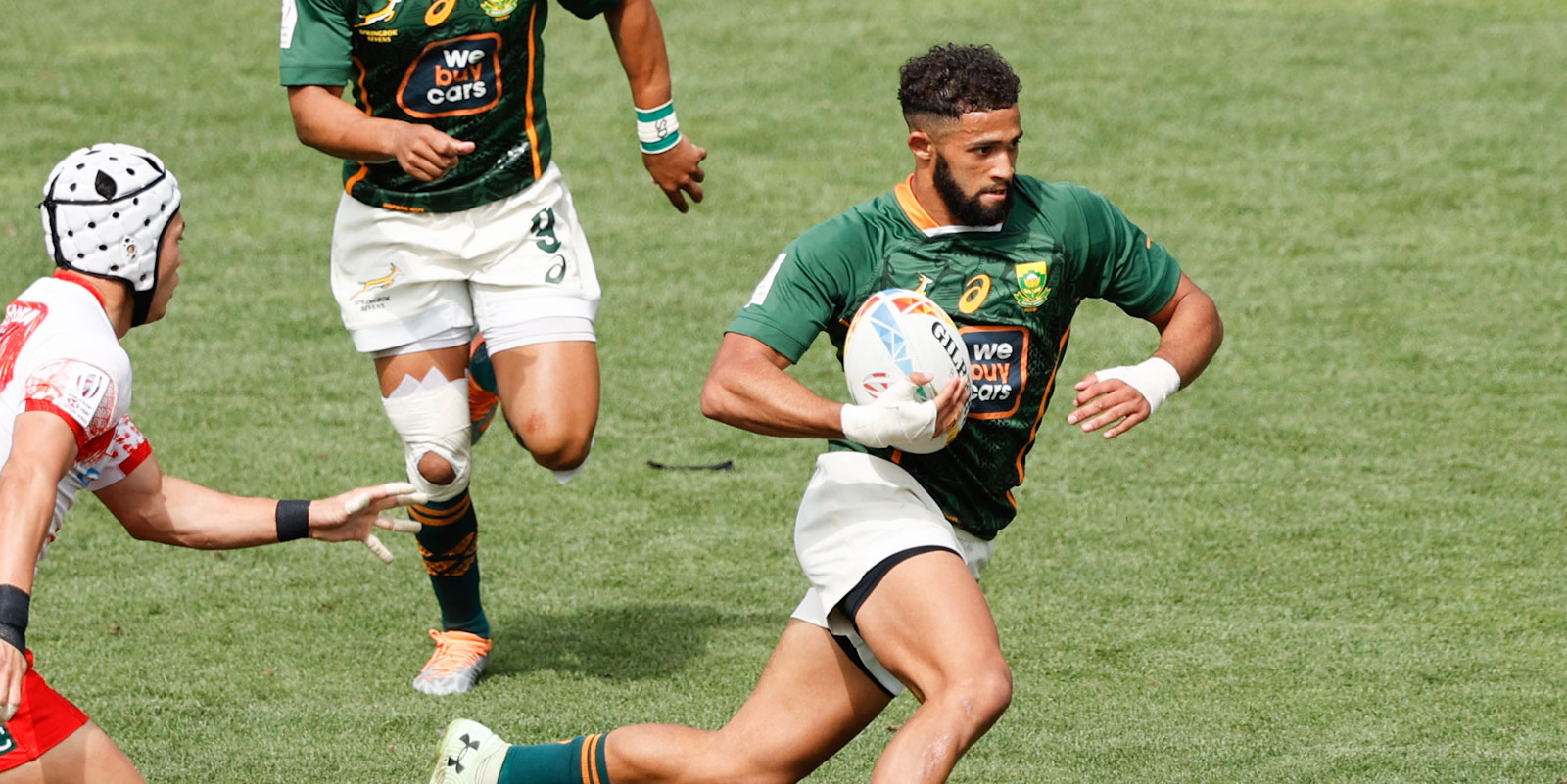 Dalvon Blood on his way to his third try against Japan.

“At times, you need some luck or the bounce of the ball to go your way, but today it did not go our way. It is true though that we are not playing as well as we could and that is something the players need to fix. The coaching staff prepare us well for each match, but somehow we fail to execute properly.”

The Blitzboks also lost Mfundo Ndhlovu before the Samoa game with an ankle injury, and JC Pretorius during the match, and will finish the tournament with only 11 fit players.

Against Samoa, the South Africans failed to get out of the blocks. The islanders scored twice from fluffed kick-off receives by the Blitzboks and to make matters worse, in quick succession.

The two tries saw Samoa take a 14-0 lead, but their third five-pointer was a real killer blow. South Africa were on attack, but lost the ball over the try-line. Samoa won the scrum on their own line, kicked ahead and outpaced the Boks for a 19-0 lead.

The World Series leaders played better in the second half, but they could only manage a Ronald Brown try three minutes from time.

Against Japan, they looked like the Blitzboks of old, scoring six tries in a 40-0 romp, suddenly looking to have found their groove again.

Dalvon Blood, who scored his first try in the green and gold against Spain on Friday, was full of running and scored a hat-trick, two from delightful footwork and the third when he accelerated trough an outside gap.

South Africa’s AJ Jacobs and Morne Ferreira have been included in a strong panel of match officials for the Rugby World ...

HSBC Cape Town Sevens back with a bang...

The ever-popular HSBC Cape Town Sevens will return to the Mother City on the weekend of 9-11 December this year, when th...

The Springbok Sevens finished the HSBC London Sevens on a high with a 14-5 victory over Ireland to claim fifth spot and ...

The Springbok Sevens on Sunday regained the lead in the HSBC World Rugby Sevens Series with a fifth-place finish at the ...

The Springbok Sevens team will have to beat Samoa with a convincing score in Toulouse at 12h22 on Saturday if they want to proceed to the Cup quarter-finals of the HSBC France Sevens, and keep their lead in the HSBC World Rugby Sevens Series for the 2022 season.

Sharks go down fighting against Ulster in Belfast

The Cell C Sharks went down fighting 24-21 against a determined Ulster outfit in their final Vodacom United Rugby Championship league match at the Kingspan Stadium in Belfast on Friday, which could see them play an away quarter-final in two weeks.

The learning curve was a steep one indeed, but the Springbok Women's Sevens squad will benefit hugely from the opening day of the HSBC France Sevens in Toulouse on Friday.

Cornal Hendricks scored a second-half hat-trick to help steer the Vodacom Bulls to a superb 38-31 victory (half-time 12-10) in their final Vodacom United Rugby Championship league match against the Ospreys in Swansea on Friday evening.

Moerat and Ungerer to start for Stormers in Llanelli

There are two changes to the DHL Stormers starting line-up for their final round Vodacom United Rugby Championship encounter with the Scarlets in Llanelli on Saturday, with kick-off at the Parc y Scarlets scheduled for 18h10 (SA time).

The DHL Stormers and Vodacom Bulls will host valuable home quarter-finals in the Vodacom United Rugby Championship against Edinburgh and the Cell C Sharks respectively, following a pulsating closing round of league action this past weekend.

Blitzboks own worst enemy in Toulouse

The Springbok Sevens team suffered a third defeat at the HSBC France Sevens in Toulouse on Sunday in what Blitzbok coach Neil Powell described as “the worst performance at a tournament in my career”.

Despite losing by 24-10 to Scotland in their final match of the HSBC France Sevens tournament in Toulouse on Sunday, the 10th place finish achieved by the Springbok Women's Sevens team was a massive result for the team, who were invited by World Rugby to play with the 10 core teams of the HSBC World Rugby Sevens Series.

The Border Ladies continued their dominance over arch-rivals DHL Western Province with a nail-biting 19-11 win in their Women’s Premier Division clash at the Brackenfell Rugby Club on Saturday afternoon, with the team from the Eastern Cape moving to the top of the standings.

After eight months of competition and an enthralling final weekend of league play, the venues for the four Vodacom United Rugby Championship quarter-finals provide an accurate summation of the power spread across the five competing nations.

The Springbok Sevens team will have to beat Samoa with a convincing score in Toulouse at 12h22 on Saturday if they want to proceed to the Cup quarter-finals of the HSBC France Sevens, and keep their lead in the HSBC World Rugby Sevens Series for the 2022 season.

The DHL Stormers and Vodacom Bulls will host valuable home quarter-finals in the Vodacom United Rugby Championship against Edinburgh and the Cell C Sharks respectively, following a pulsating closing round of league action this past weekend.