The Vodacom Bulls won an incident-packed Carling Currie Cup match 31-26 against a fiercely competitive Airlink Pumas in their Round 12 clash on Friday evening at Loftus Versfeld.

The match produced several yellow cards, a red card and a hattrick of tries, while the Airlink Pumas will feel very hard done by as they came so close in the second half to score a potential match-winning try.

The pink and grey jerseys went into the halftime break with a well-deserved 26-12 lead having scored four tries and three conversions, while the hosts were awarded a penalty try to add to their unconverted try.

With the Airlink Pumas one man down because of a red card to flyhalf Tinus de Beer for a tip tackle, the home side managed to worm their way back into the game to eventually score three tries more tries to complete their successful comeback. They managed to score all the points in the second stanza as the visitors saw a second yellow card to add to their misfortunes.

It was a high octane first half, with the Lowvelders surprisingly well in control of matters. Right wing Sebastian de Klerk scored a hattrick of tries and was also yellow carded, while pivot De Beer was red carded minutes before halftime for a dangerous tackle on Richard Kriel.

In-between hooker Eduan Swart scored the Pumas' third try off the back of a powerful maul. However, De Klerk then turned villain when he was sin binned for his attempt to stop a goal-bound maul, with the referee awarding a penalty try against them.

A pivotal moment in the game came seven minutes before the break when De Beer tried to stop Richard Kriel in full flight, who still managed to pass to his brother David to score in the wide channel. De Beer's tackle on Richard was deemed too dangerous, thus reducing the visiting team to 14 men.

But De Klerk then atoned for his earlier transgression when, soon after his return to the field, he charged down a clearance kick to gather the ball and touch down for his third. 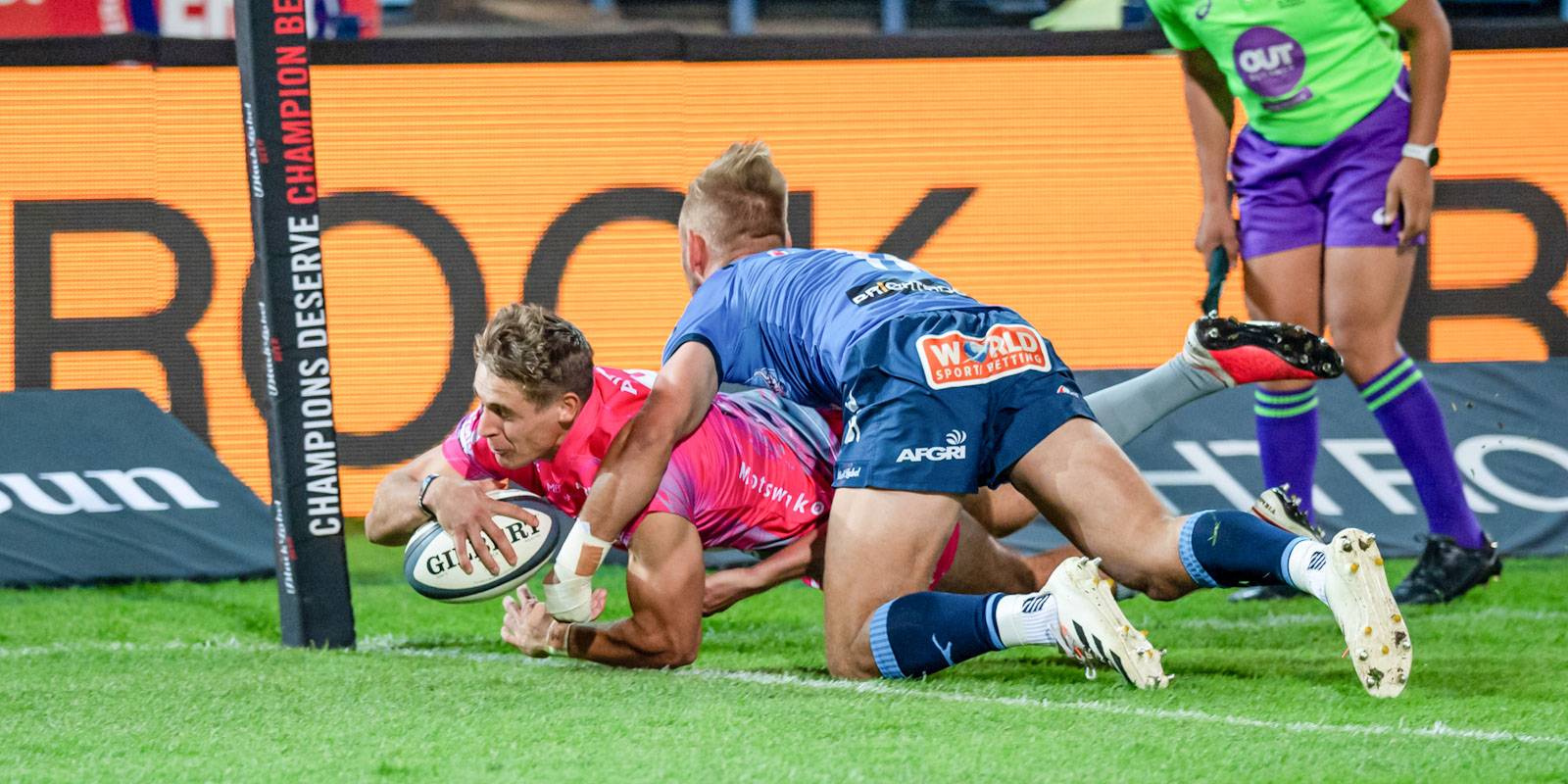 It was no surprise that the home side quickly gained the upper hand in the beginning of the second half as a result of their numerical advantage.

Lanky No 4 lock Ruan Vermaak forced his way over next to the upright and with Morne Steyn adding the extras, the light-blue jerseys were all of a sudden within one-score striking range and with almost the whole second half still to come.

Just a quarter of an hour into the second half they managed to wipe out their deficit when James Verity-Amm showed deft footwork to dribble the ball ahead, collect and score his side's fourth try, which Steyn converted to level scores at 26-26.

Minutes later the momentum swift was completed when Kriel crossed over for his second try of the game as they pulled ahead by five points to lead 31-26.

Unfortunately, the visitors then had a try disallowed for illegal play and a penalty awarded against them for having too many players attached to the ball carrier from a tap penalty. And things got worse when the referee yellow carded left wing Tapiwa Mafura for an infringement when he contested a high ball.

Home replacement backline player Keagan Johannes was also yellow carded towards the end of the match, while Varity-Amm left the field with a leg injury. Under pressure from a determined opponent, Gert Smal’s team won a crucial scrum penalty to release the pressure for a very hard-fought win.

The DHL Stormers started the defence of their Vodacom United Rugby Championship title in perfect fashion with a bonus-po...

The DHL Stormers opened the defence of their Vodacom United Rugby Championship crown with a well-deserved 38-15 win in a...

Nail-biting until the very end – with the teams’ kickers basically determining the result – as the Vodacom Bulls won the...

With three rounds remaining and the top two positions on the Carling Currie Cup log a two-horse race between the Vodacom Bulls and the Toyota Cheetahs, the spotlight now turns firmly to the fight for the two remaining playoff spots.

Five years after her first refereeing appointment at a Rugby World Cup, Aimee Barrett-Theron will do so again later this season in New Zealand after being included on an 18-member match official panel for the global showpiece from 8 October to 12 November.

It will be a crucial round of Women’s Premier Division action this weekend where results on Friday and Saturday could have a big influence on determining the two finalists on 11 June, despite another round of fixtures scheduled to take place.

Makata, Davids to bring the energy

For Sako Makata, watching the Blitzboks grind to a stuttering halt in Toulouse was a painful and frustrating experience, especially knowing how much the team was hurting following their unexpectedly disappointing showing at the HSBC France Sevens.

Windhoek Draught Griquas on Saturday served up a sensational shock in Kimberley as they romped to a 46-18 victory and snapped the Toyota Cheetahs’ unbeaten streak in this year’s Carling Currie Cup.

The Sigma Lions defeated DHL Western Province 33-10 to record a bonus-point victory and register their first Carling Currie Cup win of this year's campaign in Johannesburg on Saturday evening.

The Springbok Sevens returned to winning ways in the HSBC World Rugby Sevens Series at Twickenham on Saturday, beating Argentina, Ireland and Kenya to top Pool D at the HSBC London Sevens, the penultimate tournament in the 2022 season.