The Springbok Women scored their second successive century in the Rugby Africa Women's Cup when they beat Namibia by 128-3 in rainy conditions in Cape Town on Thursday, wrapping up their Pool A fixtures with two commanding victories.

Last week, Stanley Raubenheimer's side beat Zimbabwe by 108-0, and they followed it up with a second massive win at City Park Stadium in less than a week, in very difficult conditions. The half-time score was 54-3.

On Thursday, they improved on the 17 tries scored against Zimbabwe with 20 against Namibia, to take the Bok Women to their highest winning score ever.

Raubenheimer expressed his satisfaction with the team’s effort and said they had hoped to improve on the world record score of 141-3, held by Netherlands Women over Denmark in 2004.

“We missed out on the record due to a couple of errors, but I’m not concerned about that as there are lessons to be learned from those mistakes,” said Raubenheimer.

Zintle Mpupha scored three of her four tries in the first half.

“We had some misfortune before the game when Lusanda Dumke was ruled out after a head clash in the warm-up, and then our captain, Babalwa Latsha was red carded early in the game due to a high tackle, and we had to play the rest of the game with 14 players.

“Both those incidents were valuable lessons for us on how to adapt when things are not going your way and I think we will be better because of it.”

Raubenheimer pointed to the weather conditions as another factor: “We had the warm-up in pouring rain, then the first half was played without rain and then it came down again heavily in the second half.

“We are likely to encounter similar conditions at the Rugby World Cup in New Zealand, so it was good for us to play in the rain, although our handling in that second half downpour was not as good as it can be.”

Raubenheimer said they wanted to work on their defensive lines from kicks, hence the original conservative approach to the first half: “We wanted to get those defensive lines up and running, but then our attack was so good that we hardly had to defend, which meant our original strategy was not practical anymore. 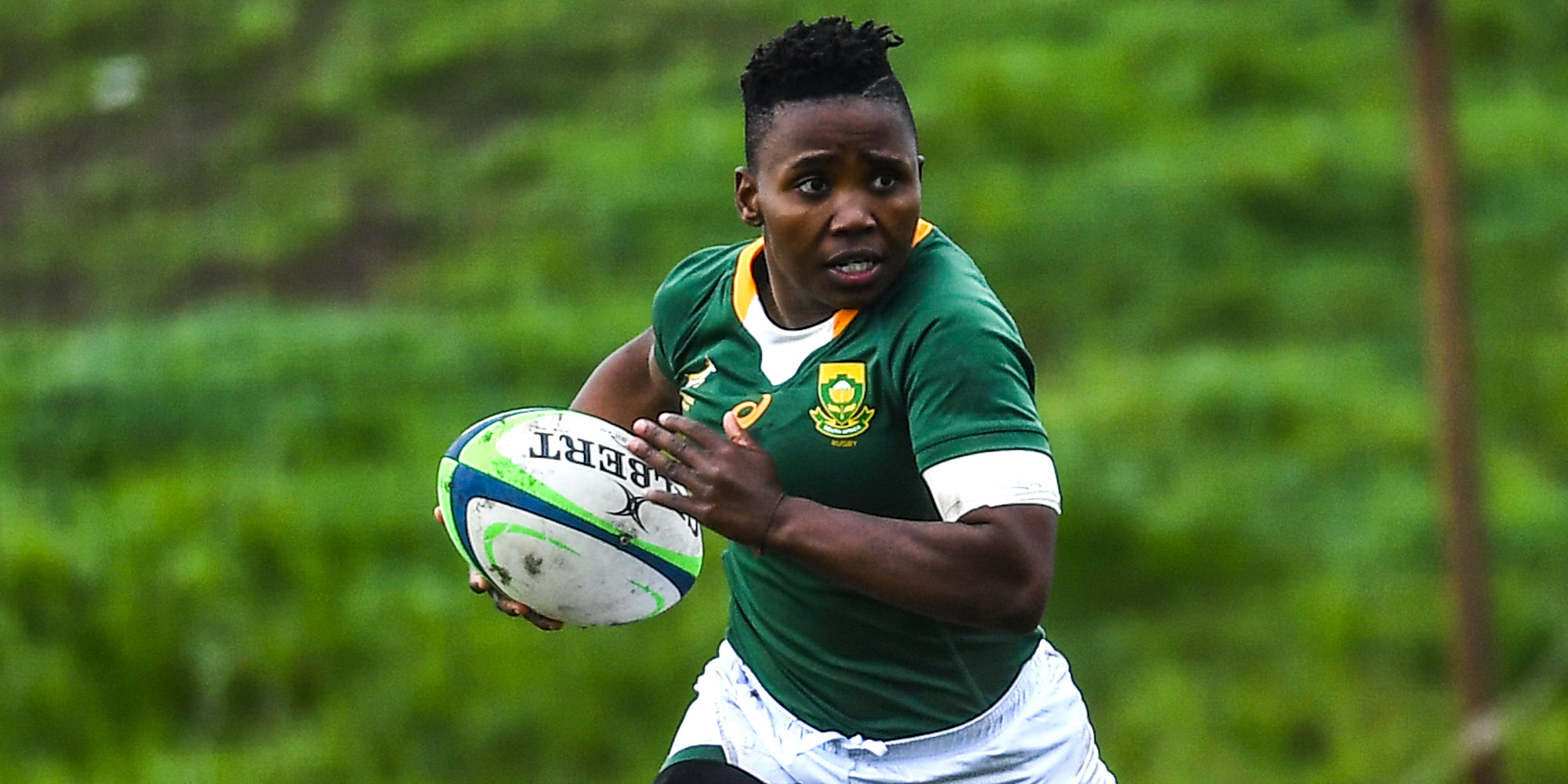 Simamkele Namba scored four tries after coming off the bench.

“We left a couple of tries out there, but that was expected given the conditions and the score line does tell the story,” added Raubenheimer.

Zintle Mpupha (centre) and Simamkele Namba (replacement back) scored four tries apiece, while Lerato Makua (lock) was named Player of the Match in her first Test start for South Africa.

Flanker Nokubongo Siko, who had to replace Dumke just before the kick-off, earned a first start and a Test match debut, as did prop Azisa Mkiva, who made her debut off the bench in the second half.

The Junior Springboks arrived in Italy on Tuesday evening and immediately went about their business to fine tune their preparations for Friday’s opening match of the Under 20 Six Nations Summer Series against England in Verona.

A resounding success for South Africa

The famous Queen hit that gets played after almost every sporting final points out that there “is no time for losers”, but that wasn’t entirely accurate when applied to the Vodacom United Rugby Championship Grand Final at the weekend.

Another opportunity to improve for Bok Women

The focus on another victory and the winning margin will not be driving the Springbok Women at City Park on Thursday when they take on Namibia in Pool A of Rugby Africa’s Women’s Cup, but the way in which they go about to achieve that.

Babalwa Latsha will take over the Springbok Women’s captaincy for their second match in Pool A of the Rugby Africa Women's Cup against Namibia on Thursday.

Springbok coach Jacques Nienaber emphasised the importance of getting all the players on the same page as quickly as possible with 10 days to go before their opening Test against Wales in the Castle Lager Incoming Series, after 13 players joined the squad on Sunday following the Vodacom United Rugby Championship final.

The Junior Springboks started their Six Nations Under-20 Summer Series campaign on a winning note when they scored a good 30-22 victory over England U20 in their opening pool match on Friday evening in Verona, Italy.

The Down Touch Griffons ended their 2022 season in perfect fashion with a commanding 45-16 win over Eastern Province at HT Pelatona Projects Stadium in Welkom on Friday, winning the Carling Currie Cup First Division title, having last lifted that coveted trophy in 2017.

Today, exactly 27 years ago, Francois Pienaar led the Springboks to what many believed was an impossible task as they lifted the Webb Ellis Cup in South Africa, and in 77 days, the country will host a second global showpiece when the Rugby World Cup Sevens kicks off in Cape Town.

Catch the Junior Boks' opening game in the U20 Summer Series, at 17h00 against England from Verona in Italy, live here. We also have Afrikaans commentary, provided by the tournament organisers - watch on the lower video.

Roos comes up top with Player of the Season Award

DHL Stormers No 8 Evan Roos has completed a dream tournament by walking away with the inaugural Vodacom Player of the United Rugby Championship Season Award, which forms part of the annual SA Rugby Awards.

The Junior Springboks arrived in Italy on Tuesday evening and immediately went about their business to fine tune their preparations for Friday’s opening match of the Under 20 Six Nations Summer Series against England in Verona.

The Junior Springboks started their Six Nations Under-20 Summer Series campaign on a winning note when they scored a good 30-22 victory over England U20 in their opening pool match on Friday evening in Verona, Italy.