A flawless kicking display by veteran Vodacom Bulls flyhalf Morne Steyn and a brace of tries by Marco van Staden (flanker) paved the way for a rewarding 40-13 bonus-point victory against the Toyota Cheetahs in their round two Carling Currie Cup match at Loftus Versfeld on Saturday.

The win allowed the Pretoria outfit to continue their dominance this season, with the team stretching their lead at the top of the standings with an impressive seventh victory in eight matches.

The Vodacom Bulls got off to a quick start, building up an encouraging 13-3 lead in the first 20 minutes, but the Free Staters’ forced their way back into the match to level the scores at 13-13 by halftime.

The home side, however, found their rhythm in the second half, scoring 27 unanswered points, which saw them outscore the men from Bloemfontein four tries to one. 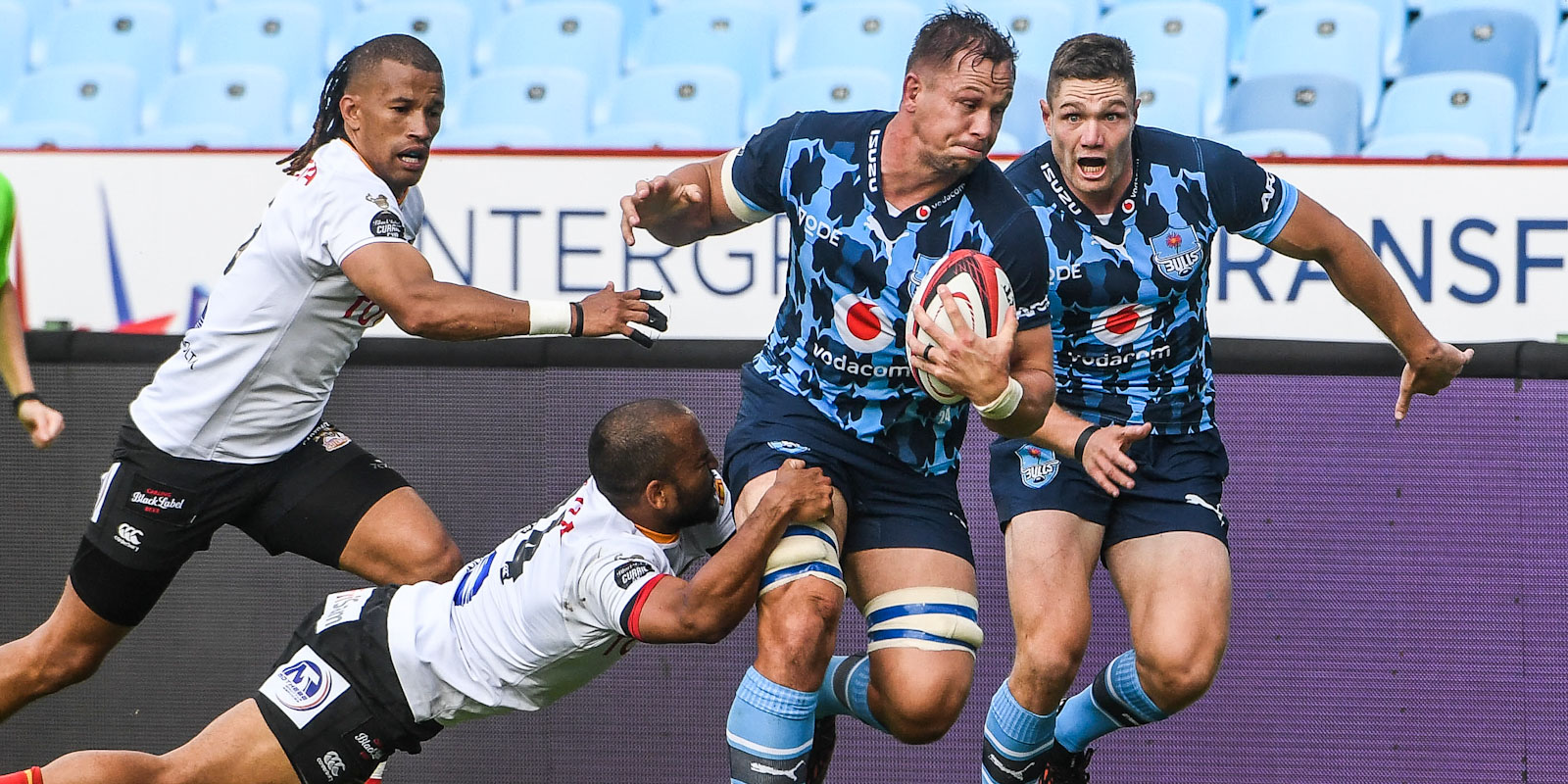 Arno Botha on the charge for the Vodacom Bulls

Steyn – who slotted four penalty goals and two conversions for his 16 points – scored the first points of the match as he landed his first three-pointer in the third minute.

His halfback partner Embrose Papier added to this minutes later as he rounded off a great try after good vision by Duane Vermeulen (No 8) and a strong dash out wide by Marco Jansen van Vuren (wing), with Steyn’s conversion handing them a 10-0 lead.

The Toyota Cheetahs hit back with a penalty goal by Frans Steyn (centre) thanks to a powerful scrum, but this was cancelled out by his Vodacom Bulls namesake minutes later.

Frans Steyn slotted his second penalty goal soon after, and the visitors’ finally broke through for their first try in the dying minutes of the half as Reinhardt Fortuin (flyhalf) – who was drafted into the starting team as a late replacement for Tian Schoeman – dotted down.

Fortuin received the ball from a solid scrum and he straightened up to cruise though the defence, with the conversion levelling the scores at 13-13.

The Toyota Cheetahs had an opportunity to take the lead for the first time on the stroke of halftime, but their attempt at goal went wayward.

The Vodacom Bulls again got a head start in the second half with Van Staden scoring their second try in the 51st minute from a rolling maul, and they built on this with two penalty goals by the in-form Steyn to extend their lead to 13 points.

The hosts continued to stamp their authority on attack with Chris Smith (replacement flyhalf) dashing through to the tryline in the 67th minute, and he added the conversion to push the score out of reach for the visitors.

The hosts fought until the end and that paid off with Van Staden earning his brace from a pick-and-go with three minutes to play after some impressive work by the forwards, and Smith added the two points to wrap up the convincing 40-13 victory.

The four South African Vodacom United Rugby Championship franchises will battle it out for the second week in a row in t...

Seasoned Springbok Willem Alberts will start at lock for the Emirates Lions in their Vodacom United Rugby Championship e...

DHL Stormers coach John Dobson had to make two injury-enforced changes to their pack of forwards for the Vodacom United ...

It may be early in the Carling Currie Cup but the pressure on the teams will rise significantly this weekend as the race for favourable log positions intensifies with a little over a month left before the pool stage concludes.

A powerful display by the Phakisa Pumas’ forwards paved the way to a 22-17 victory over Tafel Lager Griquas and their first Carling Currie Cup victory of the season in Nelspruit on Friday evening.

Phakisa Pumas hooker Marko Janse van Rensburg will celebrate a big career milestone of 50 caps for the Lowvelders on Friday if he takes the field in their Carling Currie Cup clash against Tafel Lager Griquas in Nelspruit.

Victor Sekekete and George Cronjé will earn Carling Currie Cup honours for the Toyota Cheetahs on Saturday when they line up against the Vodacom Bulls at Loftus Versfeld in their opening match of the competition.

Former Junior Springbok flyhalf Brandon Thomson missed an easy conversion that would have given the Glasgow Warriors a much-needed win against the Dragons in one of two Guinness PRO14 fixtures played over the weekend.

Three Boks in World Rugby’s Team of the Decade