Talented Xerox Lions fullback Tiaan Swanepoel scored a brace of tries and kicked four penalty goals to steer his team to a valuable 33-25 victory against the Phakisa Pumas in their round six Carling Currie Cup encounter in Nelspruit on Saturday.

The victory for the Xerox Lions saw them extend their winning run to five matches in the competition this season, while it also kept them in the running for a semi-final berth with one pool match remaining - on Wednesday against the Vodacom Bulls in Pretoria.

The Phakisa Pumas scored two tries to one by the Johannesburgers in the first half to enter the break 17-13 ahead, but roles were reversed in the second half as the home team conceded two tries and scored one.

But the costly penalties they conceded, which Swanepoel slotted over with ease, did not assist the Lowvelders' cause, and this paved the way for the Xerox Lions to snatch a 33-25 win in the end.

Darrien Landsberg had a solid outing for the home side

Phakisa Pumas No 8 Willie Engelbrecht scored the first points of the match in the second minute after gathering a smart offload from a ruck and dashing through a hole in the defence, and the successful conversion by Ginter Smuts (scrumhalf) saw them take a 7-0 lead.

This was cancelled out by the visitors two minutes later as Jaco Visagie (hooker) crashed over, with Xerox Lions captain and flyhalf Elton Jantjies levelling the scores with the conversion.

Swanepoel nudged the visitors into a 13-7 lead with back-to-back penalty goals from far out.

But this was short-lived as a penalty goal by Smuts and subsequent try by Phakisa Pumas’ Simon Westraadt (hooker) in the 37th minute after some hard work by the forwards in a rolling maul, saw the home side enter the break in a 17-13 lead. 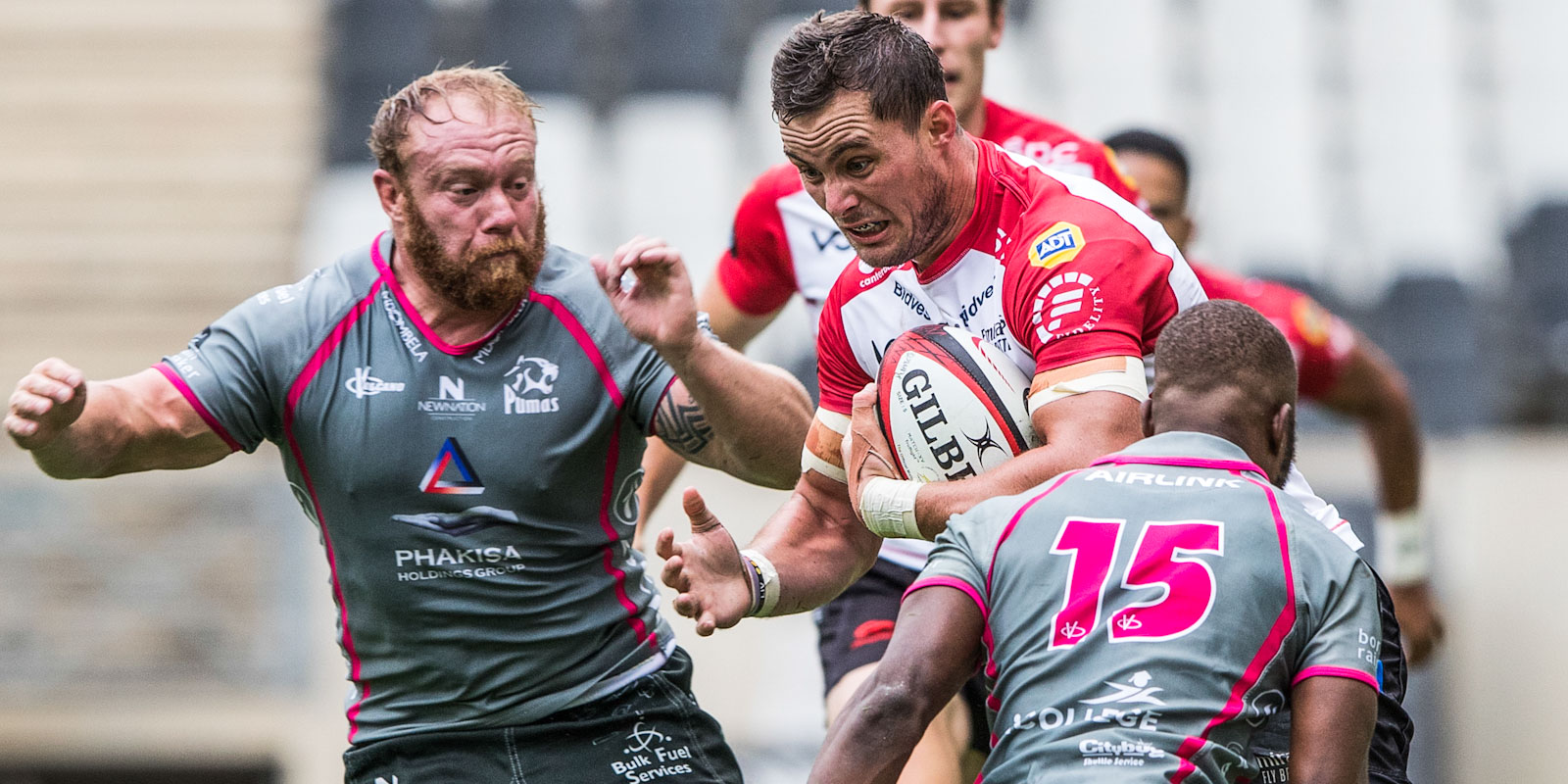 Dan Kriel on the charge for the Xerox Lions

The visitors made their presence felt early in the second half thanks to their effective attack and it paid off with Swanepoel scoring a brace of tries in the second quarter, allowing them to reclaim the lead.

Smuts added his second penalty goal in the 58th minute to reduce their deficit to seven points, but this was cancelled out by Swanepoel’s third three-pointer in the 64th minute.

The Phakisa Pumas struck back with intent in the 66th minute with Erich Cronje (centre) gathering the ball from a stunning grubber kick into space to touch down, which placed them within range of winning the match.

Swanepoel, however, dashed their hopes of an upset with less than two minutes to play as he struck over his fourth penalty goal, which saw them seal a 33-25 victory.

The four South African Vodacom United Rugby Championship franchises will battle it out for the second week in a row in t...

Seasoned Springbok Willem Alberts will start at lock for the Emirates Lions in their Vodacom United Rugby Championship e...

DHL Stormers coach John Dobson had to make two injury-enforced changes to their pack of forwards for the Vodacom United ...

Tafel Lager Griquas have opted for continuity in selection for their Carling Currie Cup match-up against the Cell C Sharks in Durban on Saturday, with coach Scott Mathie making only one change to his side for the encounter that will play out live on SuperSport.

Ulster only unbeaten Guinness PRO14 team after dramatic round

Connacht scored an upset 35-24 win over defending champions Leinster during a dramatic weekend of Guinness PRO14 rugby, leaving Ulster as the only unbeaten team after 10 rounds of the competition.

Vodacom Bulls Director of Rugby, Jake White, has named an extended squad of 28 players in preparation for their rescheduled Carling Currie Cup clash against the Xerox Lions at Loftus Versfeld on Wednesday.

The kick-off time for Saturday’s seventh round Carling Currie Cup fixture between DHL Western Province and the Cell C Sharks in Cape Town has changed.

Experienced Springbok prop Jannie du Plessis will run out for the Xerox Lions in one of three changes to coach Ivan van Rooyen’s starting team for their final Carling Currie Cup pool match, on Wednesday against the Vodacom Bulls in Pretoria.