That is the wish of Blitzboks coach Neil Powell as his team start the HSBC Canada Sevens tournament with matches against Mexico, Spain and Kenya on Saturday.

The South Africans are ranked first in the tournament, consisting of 12 teams, with a number of regulars on the World Series, such as New Zealand, Australia, Fiji and Argentina, not involved this weekend.

For Powell, the focus will be on the effort from his own players, rather than the opposition they play.

“Although we are first ranked, we are not the favourites,” said Powell.

“There are so many changes in all the squads, and everyone will be at different levels of preparation as well. There will be no form line to guide anyone at this tournament and is it therefore very important for us to focus on our standards. We need to make sure we bring the effort and keep the focus on ourselves.”

The Blitzboks will have four uncapped players – Christie Grobbelaar, Ronald Brown, Shaun Williams and Darren Adonis – representing them in the World Series for the first time and Powell welcomed their presence.

A lot of the teams here are in the same situation, with players moving on after the Olympics and will have squads that have a mix of new players and regular players on the circuit,” he said.

“For the new guys in our squad this will be a huge opportunity. They have been in our system for a while now and it is their time to step up and show they can play against international competition.”

Reflecting on their opponents on the first day, the coach was adamant that they will not underestimate any of their rivals, especially Mexico, who are one of the invitational teams in Canada.

“That is an easy trap to fall into, but we are mindful of that,” said Powell.

“We have not seen much of Mexico, but they did play in that repechage tournament before the Olympics. We need to lay a good foundation for day one and that first match is always the best place to start, so we will approach that match in that way.”

Spain and Kenya are regulars in the World Series and known opponents to the Blitzboks.

“Spain, as we know, are a team that can surprise you on the day – they have actually beaten New Zealand here in Vancouver in the past, so it will be a challenging game,” warned Powell.

“They come off their line very fast and make it tough to score tries against them. We will have to be prepared for what they will bring.

“Kenya will have one of the most experienced squads here and as always it will be very physical against them,” Powell added. 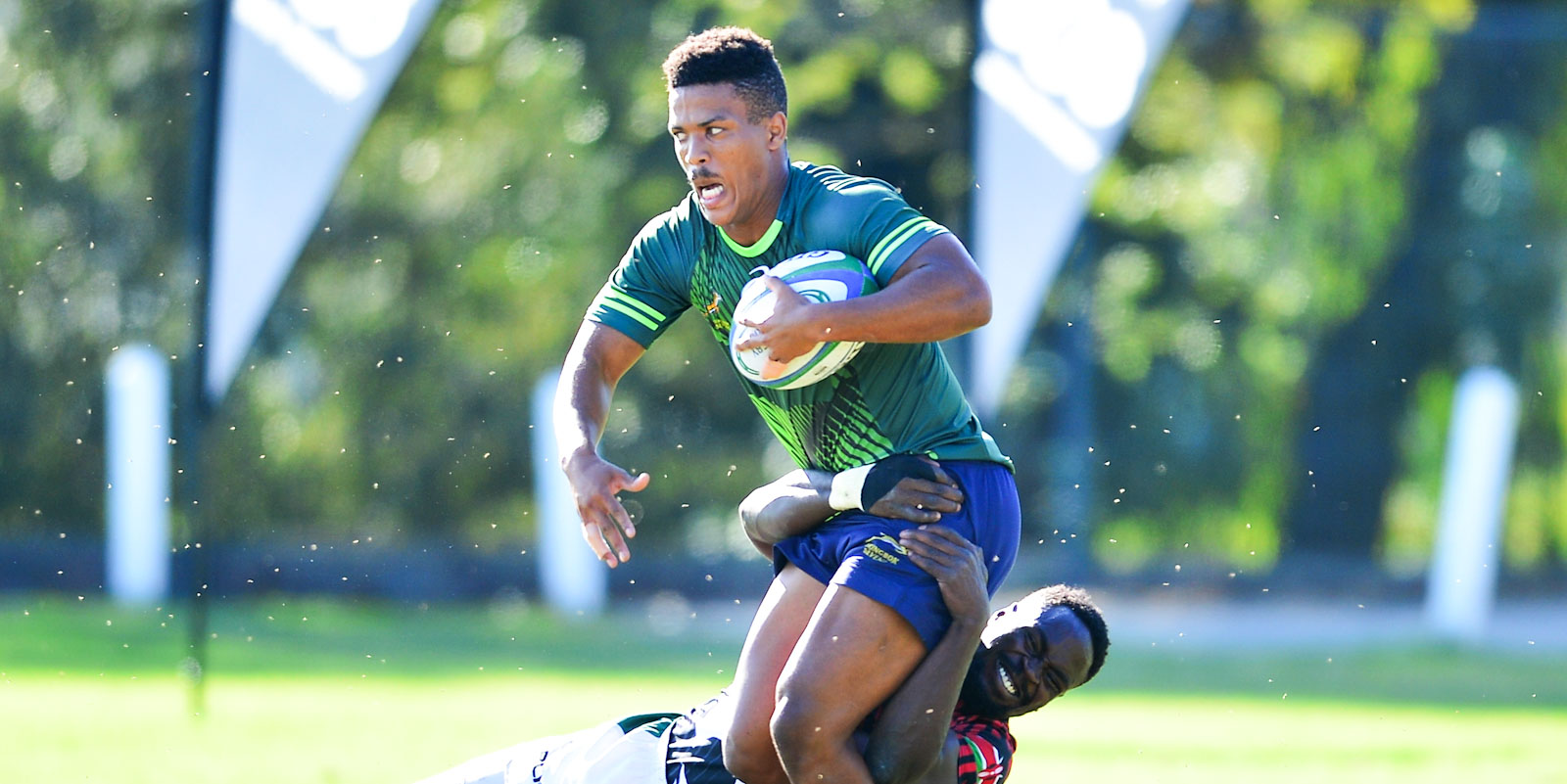 Physicality is an aspect Angelo Davids will enjoy. The 22-year-old winger – who has a healthy strike rate of 18 tries in 32 matches – is also being used at hooker by the Blitzboks, and he does not mind being moved to the forwards on occasion.

“When you play in the forwards, the physical demands are greater, no doubt,” said Davids.

“But I enjoy that part of the game, so I don't mind being moved to hooker when the team need me to play there. I like the physical stuff. Luckily for me, there are some experienced forwards in the squad, and they help me out immediately if there are any issues at scrums or the lineouts.”

It was not too long away ago – six tournaments in fact – when Davids himself was handed his very first match jersey.

“The new guys bring lots of energy and that is always good for the team,” he said.

“I can only tell them what coach Neil told me on debut – go out there and enjoy. Express yourself and do not worry about making mistakes, the other guys will look after you.”

Springbok Sevens stalwart Muller du Plessis has been ruled out with a leg injury while Ryan Oosthuizen will be given as ...

The Springbok Sevens won a third straight HSBC World Rugby Sevens Series tournament when they dazzled their way to a thr...

Ronald Brown was "Johnny-on-the-spot" in the Blitzboks' first game on the opening day of the Emirates Dubai 7s on Friday...

White back at 9 as Hooper breaks Wallaby record

Michael Hooper will surpass George Gregan for the most Tests as Wallabies captain when he leads the side out in Saturday’s Castle Lager Rugby Championship clash with the Springboks at Suncorp Stadium in Brisbane.

The Springboks are bracing themselves for another challenging outing against the Wallabies in the Castle Lager Rugby Championship on Saturday, and the players are ready to show their fighting spirit in Brisbane after last weekend’s defeat against Australia.

Salmaan Moerat and Ernst van Rhyn have been appointed co-captains of the DHL Stormers for their forthcoming European Vodacom United Rugby Championship tour.

JC Pretorius is hungry for success in Canada

Shaun Williams was surprised when told that he would be travelling to Canada with the Springbok Sevens squad this week, but for the uncapped Blitzbok, every opportunity is one to be seized.

An outstanding performance from a well-organised Australia inflicted a 30-17 defeat on the Springboks at the Suncorp Stadium in Brisbane on Saturday – their heaviest loss in 29 Tests since losing by the same margin to Argentina in Mendoza in 2018.

The Wallabies have won back the Nelson Mandela Challenge Plate with a 30-17 victory over the Springboks in their fourth round Castle Lager Rugby Championship Test at Suncorp Stadium in Brisbane.

Clean sweep on day one of HSBC Canada Sevens

The Blitzboks scored 20 tries in three matches and only conceded three on day one of the HSBC Canada Sevens as they delivered a strong performance in the opening tournament of the 2021 HSBC World Rugby Sevens Series.

Boks to reset mentally with All Blacks looming

Handré Pollard admitted that while the Springboks were bitterly disappointed following their 30-17 defeat against the Australia on Saturday it was important to reset mentally as soon as possible as they prepare to face New Zealand next week.

White back at 9 as Hooper breaks Wallaby record

Michael Hooper will surpass George Gregan for the most Tests as Wallabies captain when he leads the side out in Saturday’s Castle Lager Rugby Championship clash with the Springboks at Suncorp Stadium in Brisbane.