Bok Women impress in victory over England U20

The Springbok Women delivered a sparkling performance to beat England's Under-20 by 38-5 in an open and free-flowing friendly in London on Sunday afternoon, with Libbie Janse van Rensburg and Ayanda Malinga crossing for two tries each.

Springbok Women's coach Stanley Raubenheimer decided to give playing time to most of the players in the squad who didn't get game time in the Tests against France and Wales, and they didn't disappoint.

Playing with a strong wind in the first half, the Springbok Women made the most of their opportunites, using their pack as a platform to launch a number of very good attacks, with Sizophila Solontsi (No 8) leading the charge.

Janse van Rensburg (flyhalf) scored twice in the first half - in the seventh minute from a strong scrum and again 20 minutes later after a magnificent run that started in her own 22 - while fleet-footed fullback Donelle Snyders also crossed the English try-line. 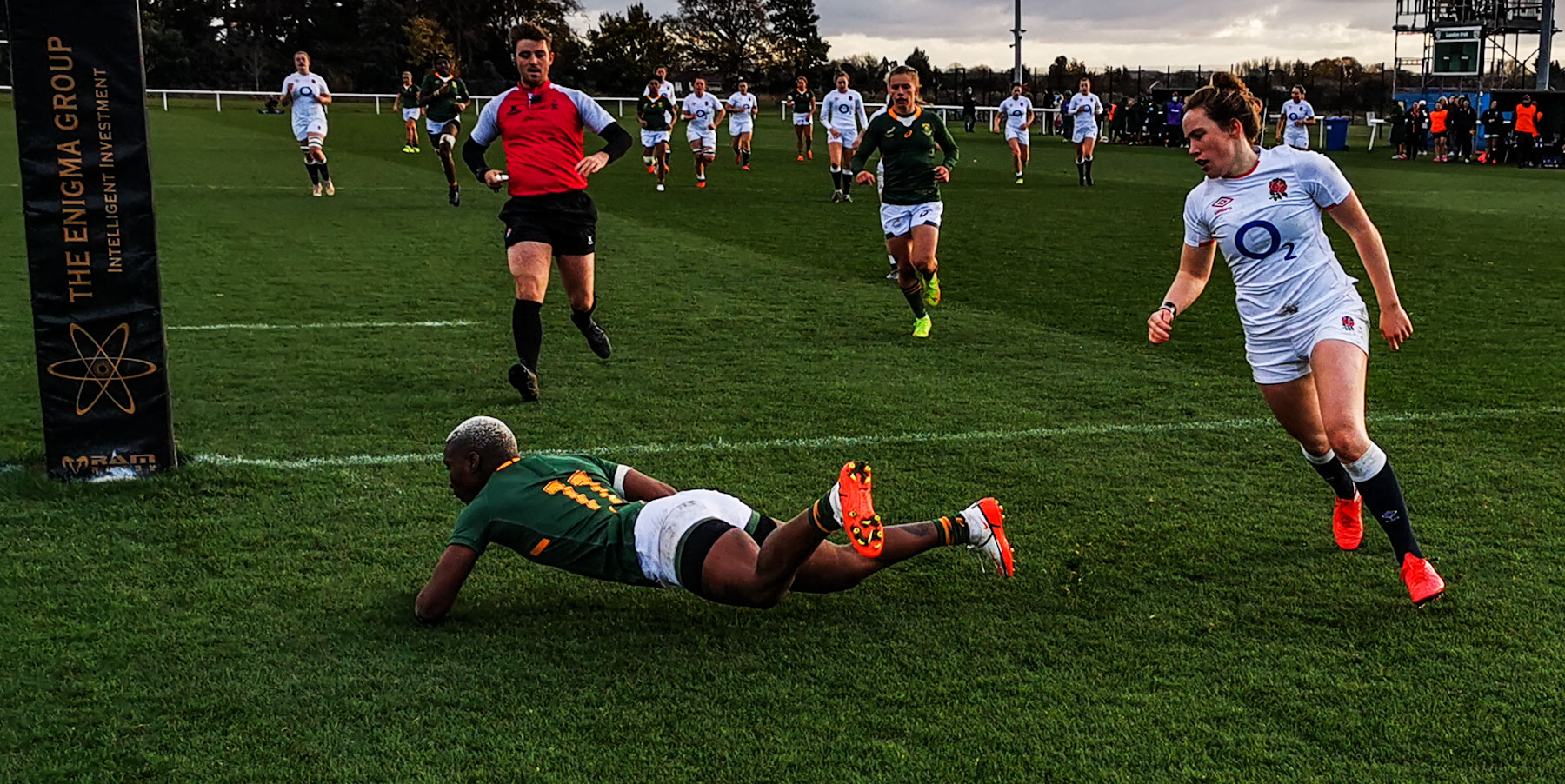 Ayanda Malinga crosses for one of her two tries.

Jakkie Cilliers (outside centre) succeeded with two difficult conversions to hand the South Africans a 19-0 lead at the break as they managed to vary their play well, attacking through the middle or sending the ball wide, and defending very well.

The first 20 minutes of the second half was scoreless as England had more possession, which tested the South Africans' defence.

Defensive pressure finally resulted in Malinga's first try, after 62 minutes, from turnover ball, while the speedy left wing crossed again after a strong 60m run six minutes later to all but put the result beyond any doubt.

Ella Lovibond (inside centre) got England's try in the 72nd minute, but moments later Nadine Roos (replacement flyhalf) added her name to the score-sheet with a well-taken try after a quick tap penalty. Cilliers converted the last two tries to double the Bok Women's score in the second half.

The score against the Barbarians on Saturday reflected some realities of where the Springbok Women squad are on their ro...

The Springbok Women had little to show at the end of a highly entertaining match with the Barbarians Women at Twickenham...

Ntoyanto: Baabaas rugby for props too ...

The festival of rugby as celebrated by the Barbarians and their annual opponents does not mean that the forward packs ar...

The strong try-line surge shown by the Springbok Women over the last two weeks of their November Series 2021 tour could ...

Much has been said and documented about the intent of any Barbarians team and their willingness to get the ball over the...

Live coverage from the London Irish ground in Hazelwood as the Springbok Women continue on their November tour with a friendly match against England's Under-20s.

England scored a hard-fought 27-26 win over the Springboks at Twickenham on Saturday to dash the South Africans’ hopes of ending the Castle Lager Outgoing Tour of the United Kingdom unbeaten.

Springbok coach Jacques Nienaber said his team will come back stronger in 2022 after ending the year with a “spanner in the engine” of a one-point defeat (27-26) to England in the final match of the Castle Lager Outgoing Tour.

England flyhalf Marcus Smith kicked a last-minute penalty goal to hand his side a nail-biting 27-26 (half-time 17-12) win over the Springboks in the final Test of 2021 for the men in green and gold.

The two test matches against France and Wales, as well as a full contact training session against England had a very positive effect on the mental and physical state of the Springbok Women squad as they realised that they could match their highly-rated opponents in that regard.

Live coverage from the London Irish ground in Hazelwood as the Springbok Women continue on their November tour with a friendly match against England's Under-20s.