The 2023 HSBC World Rugby Sevens Series schedule was announced on Tuesday, with 11 men’s tournaments – four of which will be standalone events – while all seven women’s events will be played alongside the men.

Both the Springbok Sevens and Springbok Women’s Sevens teams will be playing in Cape Town in December, with another sell-out crowd anticipated, while there is also a return to Hamilton in New Zealand and Sydney in Australia early next year.

“After missing out in the last three years, we are thrilled to see the HSBC Cape Town Sevens back on the schedule, and combined with the Rugby World Cup Sevens in September, it means local rugby fans will have another opportunity to experience some of the best entertainment available on the global rugby calendar,” said Jurie Roux, CEO of SA Rugby.

“Ever since we first hosted the South African leg of the World Series in Cape Town, it has become one of the most popular events, not only for supporters, but for the participating teams again, and we can’t wait to welcome them back to the Mother City in the summer. 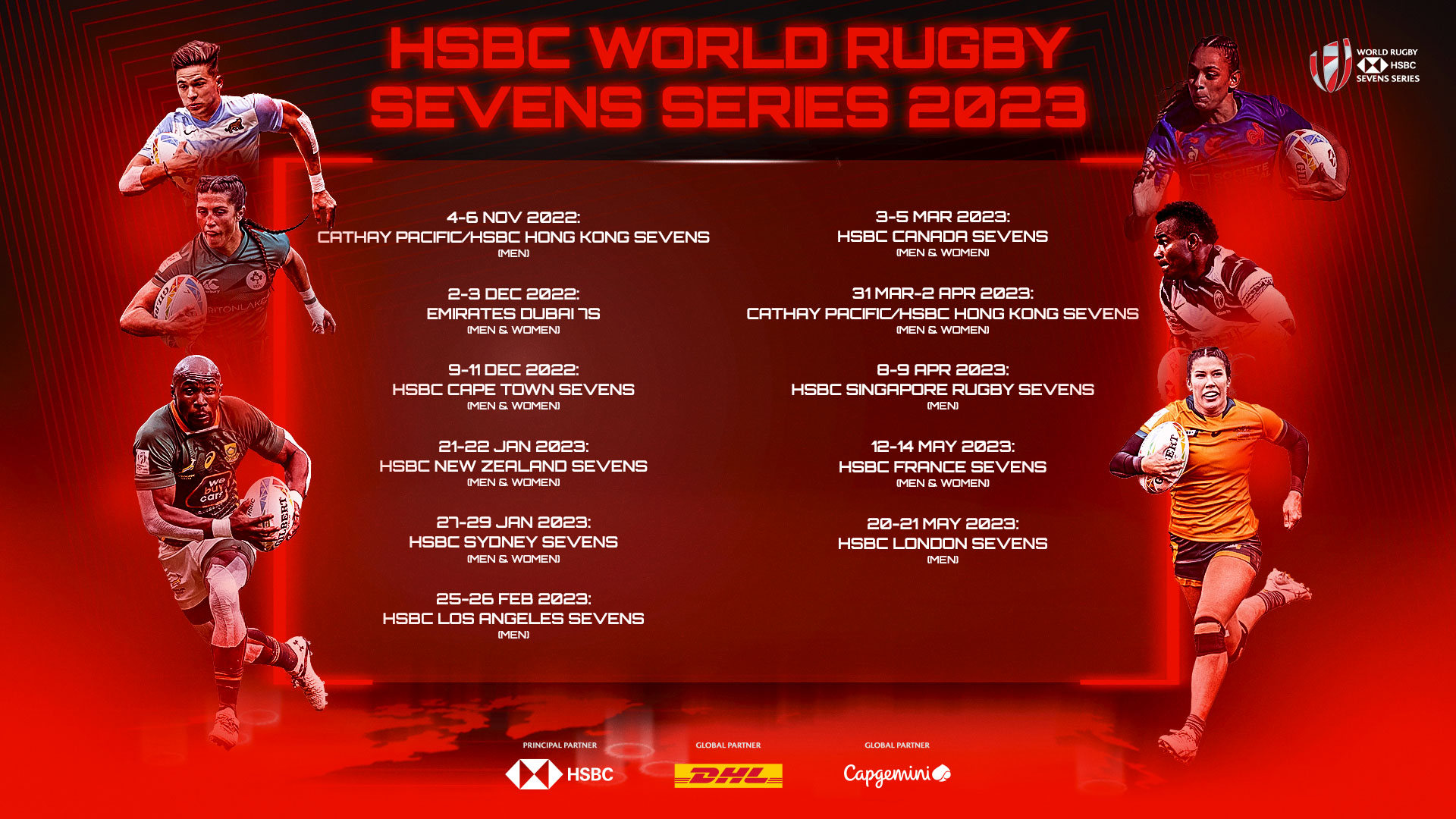 “It’s great for the game to be returning to some form of normality after a few seasons of disruption, and after playing 14 consecutive World Series tournaments abroad since Cape Town in 2019, we know our players are looking forward to playing in front of their families, friends and fans yet again.”

Ticket information for the HSBC Cape Town Sevens will be released in due course.

The 2023 season will start in Hong Kong in November, but only with men’s teams, with a return to the Chinese city in March 2023, where both men and women will compete. Vancouver will also be a combined event in 2023, meaning that the traditional women’s tournament in Langford, Canada falls away.

Los Angeles (February), Singapore (April) and London (May) will be the remaining standalone tournaments for men, with the latter closing out the 2023 season.

Olympic qualification will be pretty much on top of anyone’s agenda during the season with the top four women’s and men’s teams in 2023 World Series securing their tickets to Paris 2024.

The lifting of the Emirates Trophy on Saturday evening in Dubai was one thing, the knowledge that so many people worked ...

The Springbok Sevens team bounced back in dramatic fashion with back-to-back Pool A wins at the Emirates Dubai Sevens on...

Ngcobo wants to win the battle and the war in Duba...

The Springbok Sevens squad start will start the Emirates Dubai Sevens on Friday with a healthy dose of reality, but also...

Each of the weekend’s exciting three Carling Currie Cup fixtures produced a memorable result as the Sigma Lions finally won their first game of the campaign in Johannesburg; Windhoek Draught Griquas stunned the high-flying Toyota Cheetahs in Kimberley to end their nine-game winning run; and the Vodacom Bulls staged a strong comeback to defeat the 14-man Airlink Pumas in Pretoria.

Border Ladies book their place in the final

The defending champions of the SA Rugby Women's Premier Division, Border Ladies, secured a spot in the final of the domestic showpiece on 11 June, but they will have to wait for a week to see where and who they will play.

The Springbok Sevens on Sunday regained the lead in the HSBC World Rugby Sevens Series with a fifth-place finish at the HSBC London Sevens at Twickenham, where they won five of their six matches with a strong rebound after last weekend's underwhelming performance in Toulouse.