The Springbok Sevens team dropped two close results at the HSBC New Zealand Sevens on Sunday and finished in a disappointing seventh place at the FMG Stadium in Hamilton, as well as sliding to fourth on the overall HSBC World Rugby Sevens Series standings for the 2023 season.

Argentina won the title by beating New Zealand 14-12 in the final, with the hosts moving to the top of the standings. The top four teams will automatically qualify for the 2024 Olympic Games at the end of the season.

After their clean sweep in the pool on Saturday, which included a win over Argentina, the two defeats on Sunday – 22-17 to France and 21-14 to Ireland – came as a disappointment to Springbok Sevens coach Sandile Ngcobo, who said his side's execution, or lack thereof, was the main culprit.

“We have a team motto and culture and one of those are at least 80% tackle completion, something we did not do today,” said Ngcobo.

“I think we were grabbing arms and not trying to get our shoulders on bodies, which resulted in some missed tackles, and we paid the price. We were not quite there today.

“When we lost the battle on the floor and contested poorly at the kick-offs, we placed ourselves under a lot of pressure. Those two areas are crucial in sevens and we did not do well in those two areas today.” 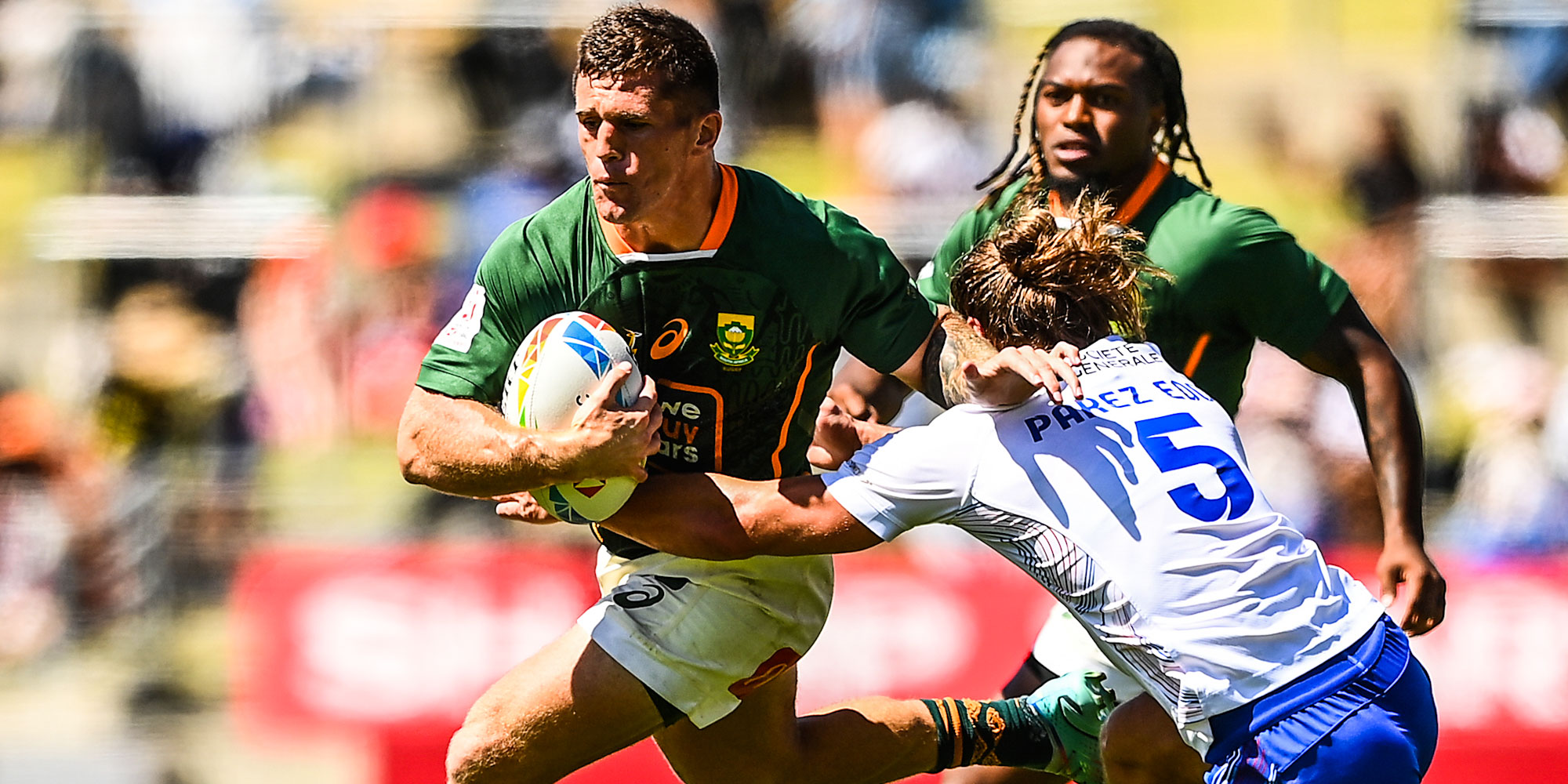 Ricardo Duarttee tries to evade a French defender in the quarter-final.

Possession was another aspect that hampered their progress, but Ngcobo was more concerned about not using the ball when opportunities were created.

“We are a fast team and when we play against teams who are physically bigger than us, it is crucial that we use that advantage,” he said.

“There is a plan for every opponent, but for that to work, one needs to execute when you have the opportunity. That did not happen today.”

Ngcobo said they will regroup and be ready to go again come the HSBC Sydney Sevens next weekend: “It is going to be a short turnaround – we are playing on Friday already, so we will have three days to analyse and adjust where needed and then hit Sydney with a fresh effort.

“I saw enough positives here over the weekend to travel to Australia with confidence and I thought Jaiden Baron did well on debut. So although we are disappointed about the effort on Sunday, there is much anticipation to go again next weekend.”

The team lost Selvyn Davids to a groin strain and he did not play on Sunday. He will be medically assessed and replaced if needed, the coach said: “He worked hard back home to get back in shape and it was unfortunate that he injured his groin, but these things happen. He is a valuable player in our system.” 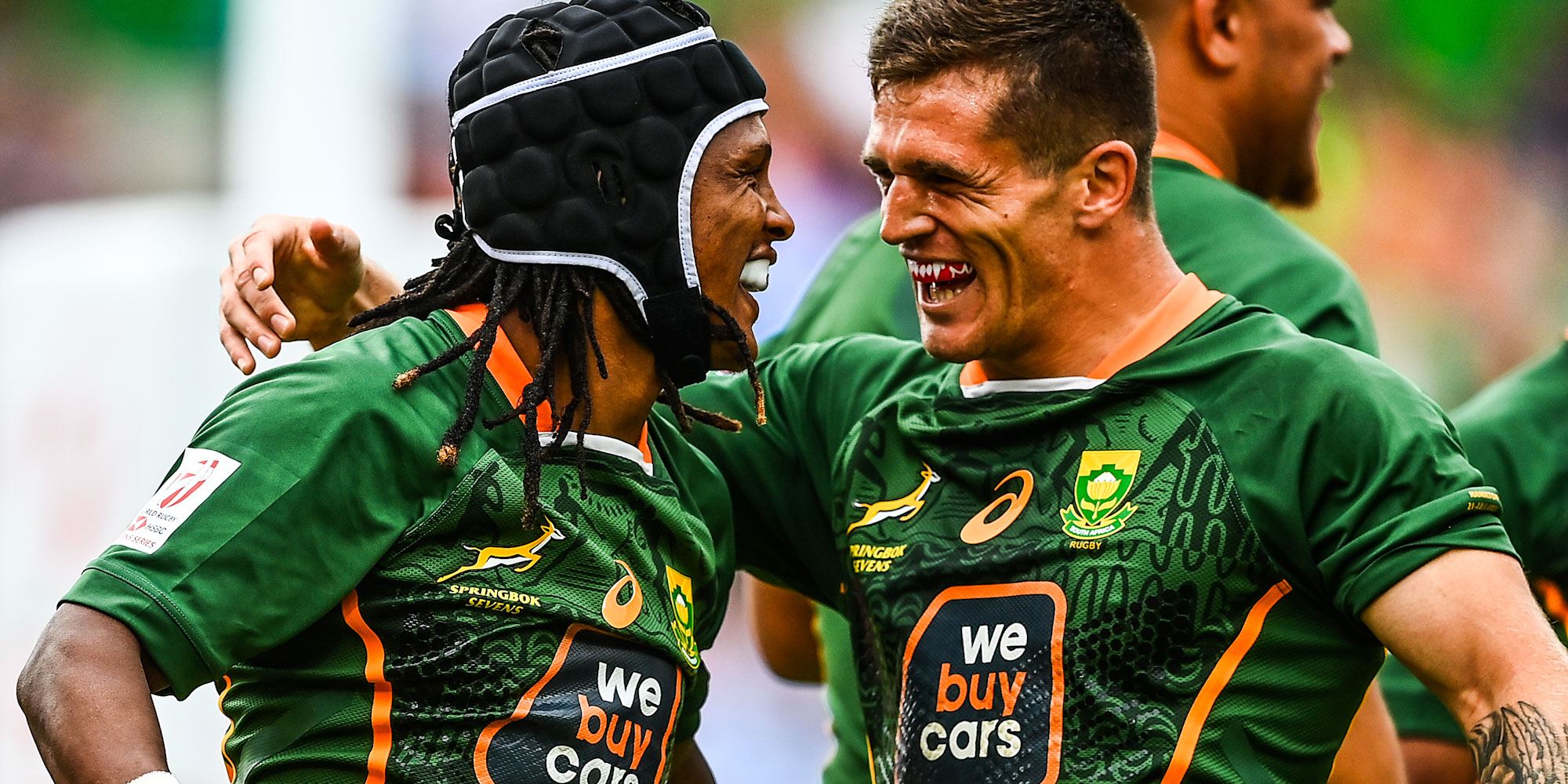 Jaiden Baron (left) scored his first try for the Blitzboks on Sunday.

In the quarter-final against France, the physical dominance of the European side at the breakdown proved decisive in a match that yielded four tries to Les Bleus and three to the Blitzboks.

The French scored early when Jonathan Laugel crashed over in the first minute and after dominating the opening spell, Nelson Epee extended their lead. Christie Grobbelaar ran hard and onto a good offload by Impi Visser to get one back to his team just before the break, which saw France lead by 12-7.

The Blitzboks picked up the next try as well when Dalvon Blood dotted down to draw level, but another by Laugel and a good team try rounded off by Varian Pasquet stretched the lead to 22-12 with a minute to play.

The Blitzboks scored their third when Shaun Williams went over out wide, but they failed to grab more points before referee Paulo Duarte called an end to proceedings.

In their fifth-place semi-final later on Sunday, the Irish outlasted the Blitzboks, scoring three tries to two. Williams opened the scoring, but two quick tries by Ireland saw them jump into a 12-7 lead at the break.

The second half response was a good one, with debutant Baron dotting down for his first World Series try to even things up, but when Jordan Conroy raced in two minutes from time to extend the Irish lead to 21-14, there was no comeback for the men in green.

Blitzboks up to second after Sydney performance...

The Springbok Sevens team moved into the second position on the HSBC World Rugby Sevens Series log after their silver me...

Disappointment for Blitzboks in Sydney final...

It wasn't to be for the Springbok Sevens team after a tough weekend of playing great rugby and losing key playes to inju...

Springbok Sevens coach Sandile Ngcobo heaped praise on his players after the Blitzboks made it into the last four in Aus...

The Springbok Sevens team secured a dramatic 17-14 win over New Zealand at Allianz Stadium on Saturday to finish undefea...

The DHL Stormers delivered a strong second-half performance in their Heineken Champions Cup match against ASM Clermont Auvergne at the DHL Stadium in Cape Town on Saturday to overturn a 6-3 halftime deficit into a 30-16 victory for a favourable playoff spot.

Quins too good for Sharks in London

Harlequins won an exciting and free-flowing Heineken Champions Cup match against the Cell C Sharks by 39-29 (half-time 24-22) on a sunny afternoon at the Twickenham Stoop in London on Saturday, with the visitors grabbing a crucial try-scoring bonus point late in the game.

Teams named for final pool round in Europe

The five South African teams in action over the coming days in the final round of pool action of the Heineken Champions Cup and the EPCR Challenge Cup have been named.