Former Springbok captain Jean de Villiers shared some special words of inspiration and encouragement with the Junior Springbok squad at their capping ceremony in Stellenbosch on Tuesday afternoon, where parents, friends and family of the players and management staff, as well as members of the media, braved the Cape winter weather to wish the team well for the forthcoming U20 Summer Series in Italy.

De Villiers regards the Junior Springboks as a fantastic stepping stone to launch the international aspirations of talented young rugby players. He congratulated the squad of 2022 on their selection, but he also had words of caution.

“I can still vividly remember my time when I sat right there were you are sitting now,” De Villiers recalled.

“My time with the SA Under-21 team was a fantastic and enjoyable period in my rugby life, and that time was definitely the highlight of my early rugby career.

“The hard work really start from here because you will have to show, through your conduct on and off the field, that you are deserving to be here and that you have the ability and mentality to kick on from here.”

He then went on to explain how his time in age-group international rugby had helped him prepare for the journey of Test match rugby with the Springboks, who he represented in more than 100 Tests.

Apart from urging the young men to grab their opportunities with both hands, De Villiers also reminded the Junior Springboks to enjoy the occasion.

“You have done well to be selected, the rugby will be hard and expectations high, but do remember to enjoy the occasion because playing for your country is a special occasion," he said.

“So well done on your selection and I want to wish you everything of the best as you launch your international careers.” 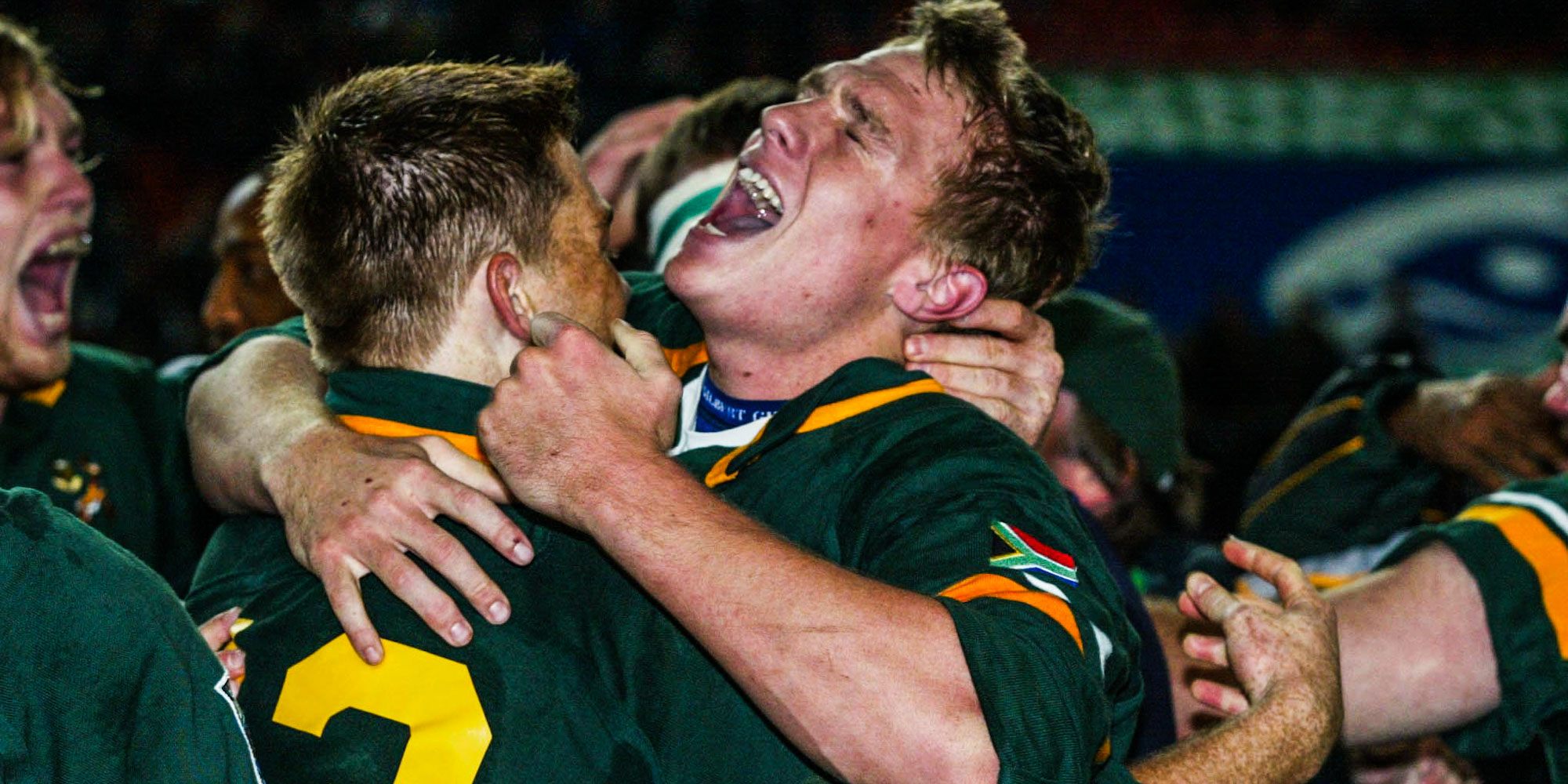 An ecstatic Jean de Villiers celebrates the Junior Boks winning the U21 World Championship in 2002.

The former Springbok captain has, since his international retirement in 2015, remained involved in rugby at various levels, taking on important roles such as the chairmanship of the Chris Burger Petro Jackson Players’ Fund and MyPlayers. He is also a respected analyst and commentator for SuperSport.

"What a great privilege it was to have Jean here today, and funnily enough I was there in Johannesburg on that day they won the U21 tournament (in 2002),” said Nhleko.

“The biggest thing for all these players is to understanding that this is part of learning and their journey, and it will by no means get any easier. They have worked to be here, but we will embark on a journey that will demand a lot more from all of us. We are excited about that journey and looking forward to the challenge.”

The Junior Springbok squad will have one more training day in Stellenbosch on Wednesday and after a short break they will then reassemble on Sunday before flying out to Italy on Monday evening.

The Junior Boks will open their Summer Series commitments against England on Friday, 24 June, and that will be followed by their second match on Wednesday, 29 June against Ireland.

The South Africans will complete their pool fixtures on Tuesday, 5 July against France before playing a final cross-pool fixture one week later, on Tuesday, 12 July, with their opponent to be determined according to the final standings.

Two South African Under-18 sides, consisting of 26 players each, have been named to take on their age-group counterparts...

Junior Springbok head coach Bafana Nhleko has paid tribute to his conquering side for their eagerness to learn and impro...

Catch the Junior Boks' final match in the U20 Summer Series, at 21h00 against Wales from Treviso in Italy, live here as ...

Junior Springboks head coach Bafana Nhleko has made four changes to his starting pack and rotated his scrumhalves for Tu...

Springboks encourage youth as they mark celebrations in Mamelodi

The Springboks celebrated Youth Day with a special visit to the Thandanani Drop-Inn Centre in Mamelodi in Pretoria on Wednesday, with several players unloading food, chopping vegetables and serving meals to young children, in conjunction with FoodForward SA.

SANZAAR confirmed the 12-match schedule for the Castle Lager Rugby Championship on Thursday, with an innovative 'mini-tour' format introduced in what is a departure from the previous home and away structure that has been in place since 2012 when Argentina joined the Springboks, Australia and New Zealand to create a four-team competition.

Excitement builds for SA champion to be crowned

A South African champion will be crowned in what will be a thrilling – and sold-out – inaugural Vodacom United Rugby Championship final in Cape Town on Saturday, when the DHL Stormers take on the Vodacom Bulls after booking the first all-South African final in the north-south showpiece last week.

Springbok coach Jacques Nienaber said his training squad are making strides as they wrapped up the second week of their preparation camp in Pretoria on Friday, and added the two South African sides contesting Saturday’s Vodacom United Rugby Championship final in Cape Town will be a shot in the arm for the national squad as they prepare for the Castle Lager Incoming Series against Wales, which kicks off next month.