The Junior Springboks left their best for last as they beat Wales by 47-27 (half-time 26-3) in the final match of the Six Nations U20 Summer Series in Treviso on Tuesday night, ensuring they are the only team to leave Italy unbeaten after a few weeks of top class Under-20 rugby.

After winning their pool games against England, Ireland and France, the SA Under-20s were pitted against Wales in the series finale, with the Junior Boks impressive as they won their fourth game on the trot in Italy.

Replacement hooker Tiaan Lange scored three of the South Africans' seven tries and if it wasn't for lapses in concentration late in both halves from the Junior Boks, the victory could have been bigger.

Junior Springbok captain Sacha Mngomezulu said afterwards playing in the U20 Summer Series was a dream come true for him and the team.

"The boys worked extremely hard and they deserve this," said Mngomezulu.

"Credit must also go to the coaches who made us work hard and put in such a good effort for us to be ready.

"It's an amazing feeling standing here unbeaten after four games. Not too long ago, we didn't even play rugby, so credit to World Rugby and the Six Nations for staging this excellent tournament. They allowed the boys to create life long memories," added the Junior Bok skipper. 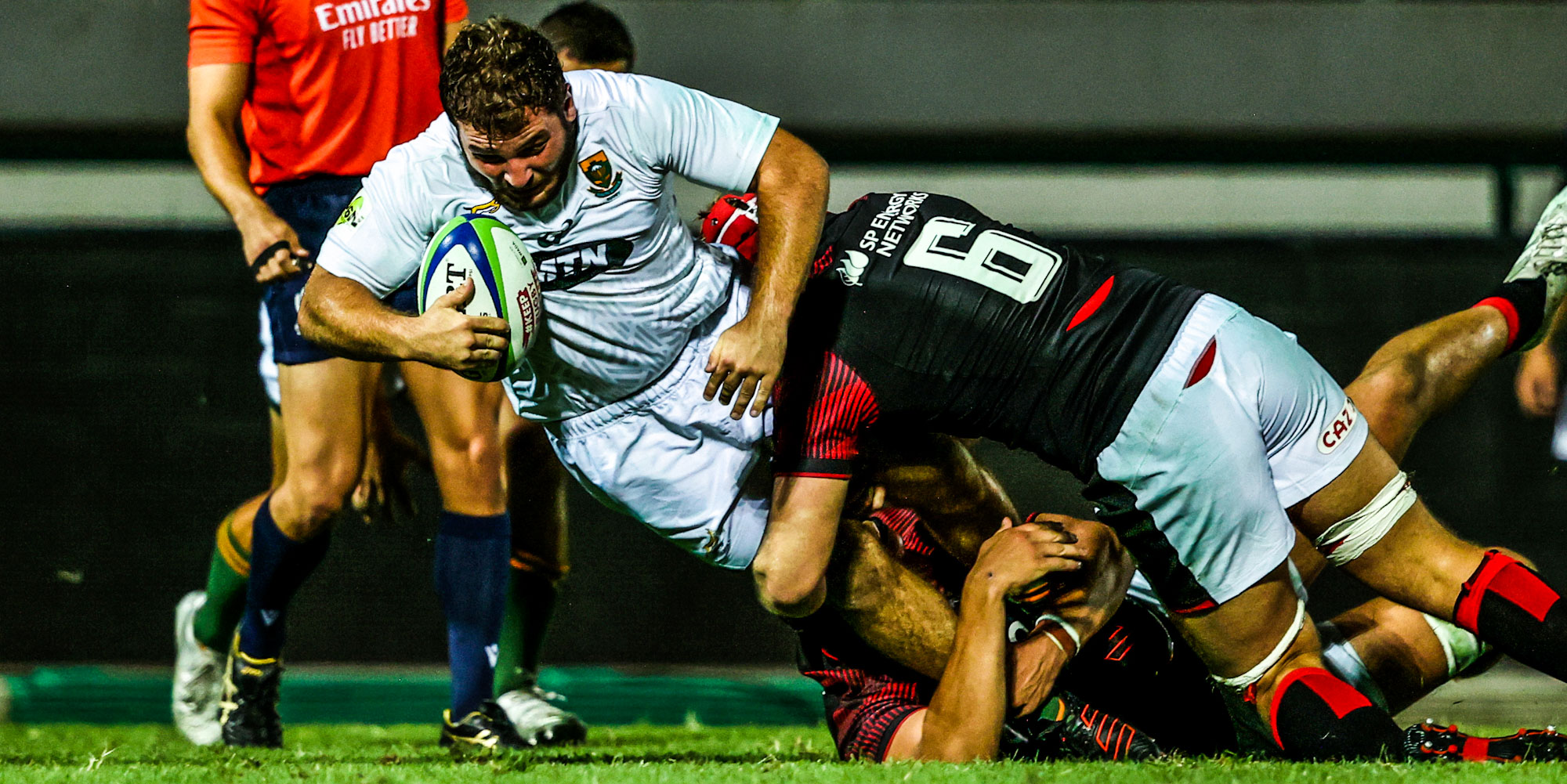 Tiaan Lange scored a hat-trick of tries against Wales.

Bafana Nhleko's team were impressive in the opening half, dominating the kicking game and possession, while the Welsh struggled with the South African physicality.

No 8 Louw Nel went over in the corner after a quick tap penalty for the first try of the match in the sixth minute. Mngomezulu added the conversion from the side to hand the SA U20s a 7-0 lead.

Wales skipper Joe Watkins landed his first points when he nailed a penalty goal from the restart, but in the next move, SA hooker Lukhanyo Vokozela was injured with Wales prop Nathan Evans yellow carded for a dangerous tackle.

From the ensuing lineout, Lange - who had just replaced Vokozela - scored the second try, also converted by Mngomezulu, to stretch the Junior Boks' lead to 14-3.

The SA kicking game gave them positional advantage, while their defence was also solid whenever the Welsh threatened. 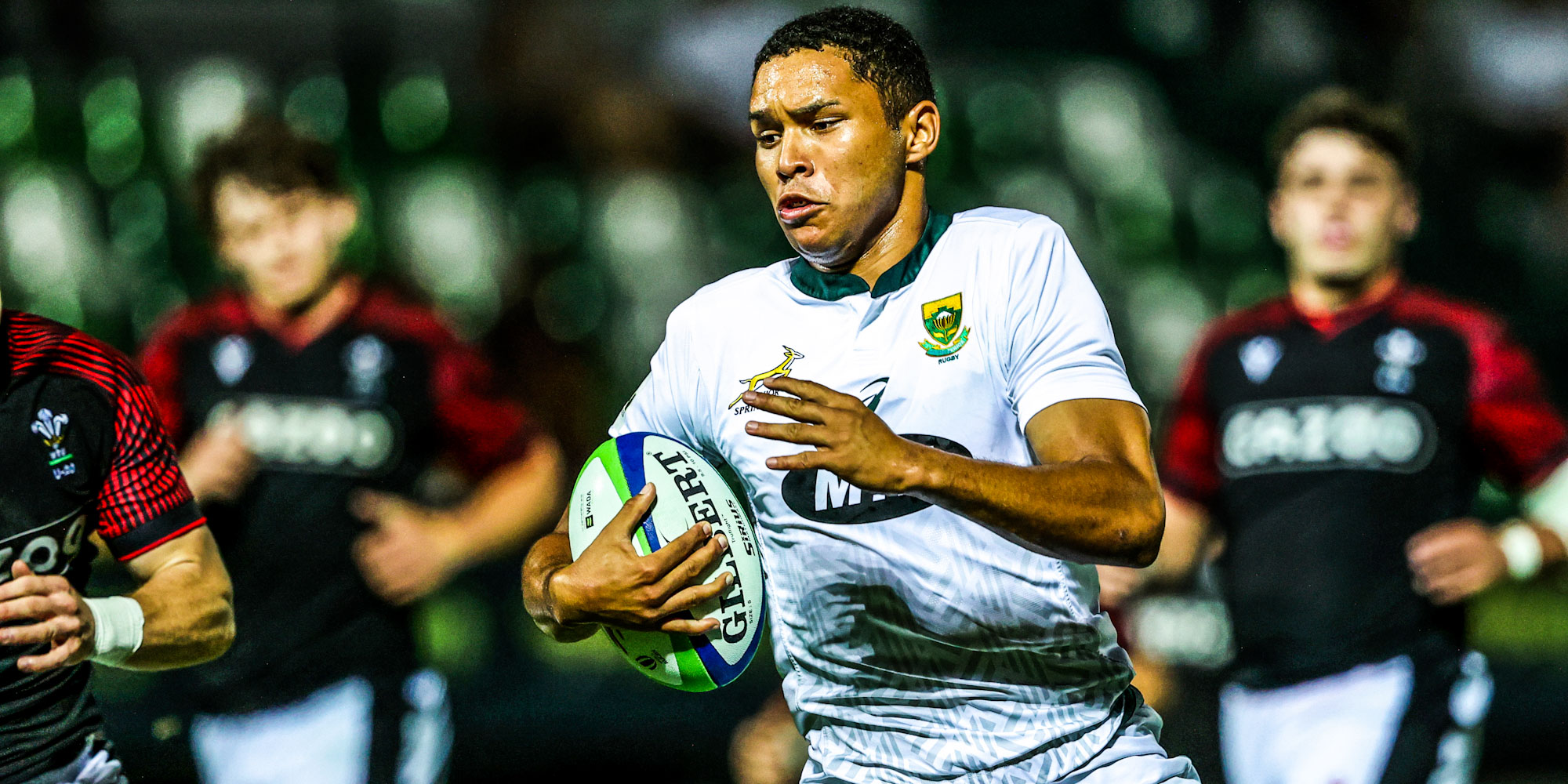 Suleiman Hartzenberg goes over for the first of his two tries.

In the 22nd minute, inside centre Suleiman Hartzenberg scored a brilliant try when he sliced though the Welsh defence from a lineout to score under the posts.

With the score at 21-3, the SA U20s looked settled and in control, and they went even further ahead a few minutes later when Lange went over for his second try.

Shortly thereafter, Mngomezulu was forced to leave the field with an arm injury, with Neil le Roux coming on at scrumhalf and Nico Steyn moving to flyhalf.

The Junior Boks were then reduced to 14 men when Nel was yellow carded for foul play, all of which cost the SA U20s some momentum.

Wales drew first blood in the second half when their outside centre Mason Grady outpaced the Junior Boks defence to score our wide, reducing the South Africans' lead to 26-8. 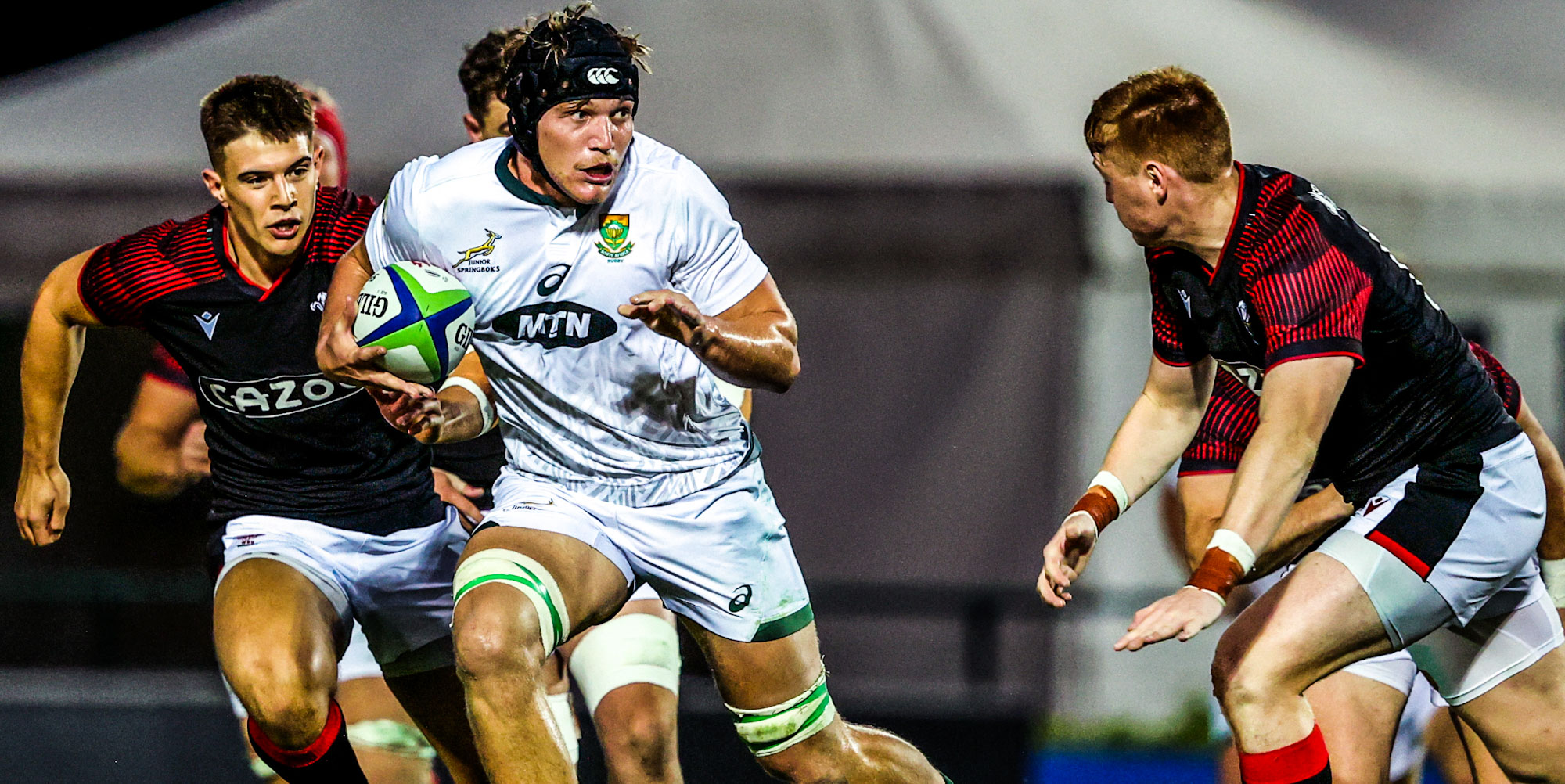 Louw Nel opened the scoring for the Junior Boks.

But South Africa hit back with their first try of the second half when Lange went over from close quarters for his third five-pointer, converted by Donovan Don, which took the lead to 33-8 with plenty of time left to play.

Hartzenberg then grabbed his second when he won the foot race to a brilliant grubber by Steyn. Don converted brilliantly take the score to 40-8 with 20 minutes to go.

Five minutes later, it was 47-8 when outside centre Ethan James waltzed through to score under the posts, while Don again added the extras.

It was the last score for the Junior Boks as Wales finished with three late tries, by reserve fullback Joe Westwood, flanker Ethan Fackrell and reserve prop Cameron Jones.

But the night belonged to the Junior Boks who simply had too much class.

The South African Under-18 team maintained their status as the only unbeaten team in SA Rugby’s U18 International Series...

France have ended their Under-18 International Series campaign on a winning note with a 20-15 (halftime 12-12) victory o...

SA U18s hope to sign off in style on Saturday...

The South African Under-18 teams are aiming for improved performances when they wrap up the U18 International Series aga...

The South African Under-18s are the only unbeaten team left in SA Rugby’s U18 International Series after an impressive v...

Springbok assistant coach Deon Davids and prop Frans Malherbe said the team were determined to improve after suffering a heart-breaking 13-12 defeat against Wales in the Castle Lager Incoming Series in Bloemfontein last weekend as they began their preparations on Monday for the tournament finale in Cape Town on Saturday.

Junior Springboks head coach Bafana Nhleko has made four changes to his starting pack and rotated his scrumhalves for Tuesday night’s Under-20 Six Nations Summer Series Final against Wales in Treviso.

SA Rugby has warned Springbok fans to beware of online websites claiming to have Test match tickets for sale. Fans have increasingly reported being conned into buying tickets for Springbok matches only for the seller to default having taken payment.

The Springbok Women had demanding training sessions on the first day of their pre-departure camp in Pretoria on Monday, as Stanley Raubenheimer and his coaching staff wasted no time to start preparing the 30 players for the two-Test tour to Japan later this month.

Springbok fullback Warrick Gelant and flank Deon Fourie yesterday attributed their 13-12 defeat against Wales in their second Castle Lager Incoming Series test to mistakes and said the team was determined to go to Cape Town and win the series.

Springbok Women to host Spain in two Tests in August

The Springbok Women will take on Spain in a two-Test series in August, in what will be their final match preparations before they depart to New Zealand for the Rugby World Cup.

Junior Springbok head coach Bafana Nhleko has paid tribute to his conquering side for their eagerness to learn and improve as a team following their thrilling 47-27 triumph over Wales to claim the Under-20 Six Nations Summer Series title in Treviso, Italy on Tuesday evening.

While the Springboks were immensely proud of their team-mates Eben Etzebeth (lock – 100th Test) and Bongi Mbonambi (hooker – 50th Test) achieving special milestones in Saturday’s series decider against Wales, their main goal was to win the match to make the celebrations extra special for the players.

The SA Schools teams return to action in Cape Town on Saturday having last played in 2019 and judging by the excitement in the camps as they prepared at Hoër Landbouskool Boland near Paarl, the players and their management teams can’t wait for the opportunity to play again.

Kolbe: "We need to go out and execute on Saturday"

Springbok prop Steven Kitshoff and wing Cheslin Kolbe said they were determined to make the country proud as they look forward to Saturday’s Castle Lager Incoming Series decider against Wales in Cape Town.

Springbok assistant coach Deon Davids and prop Frans Malherbe said the team were determined to improve after suffering a heart-breaking 13-12 defeat against Wales in the Castle Lager Incoming Series in Bloemfontein last weekend as they began their preparations on Monday for the tournament finale in Cape Town on Saturday.

Springbok Women to host Spain in two Tests in August

The Springbok Women will take on Spain in a two-Test series in August, in what will be their final match preparations before they depart to New Zealand for the Rugby World Cup.